21 houses handed over in Trench Town 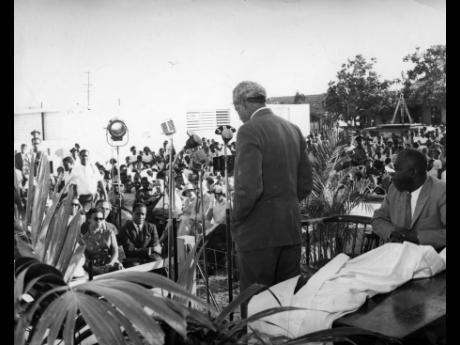 Premier Norman Manley addressing the large audience at the official opening of the Trench Town Pilot Housing Scheme on January 26, 1962. At his right is the mayor, Councillor Frank Spaulding.

21 families celebrated getting the keys to their new homes. Premier Norman Manley handed over the units and asked that the occupants meet their financial obligations. He also talked about the grave need for housing in Jamaica but sought to assure others that their time would come soon.

‘WILL GO FAST AS WE CAN…

THE PREMIER, the Hon Norman Manley, Q.C., handed over the first 21 units of the Trench Town Pilot Housing Scheme to the occupants yesterday afternoon. He sympathised with people lacking homes and promised: “Everyone’s turn will come.”

The project was blessed by the Rev Hugh Sherlock. Opening remarks from the minister of housing, followed.

Sterling said the project’s first stage will consist of 294 houses, to be followed by the construction of 308, financed by a joint fund from the United States and Jamaica Governments.

The minister called for the aid of the “little man”, who, he said, could do the most to help the Government meet the cost of slum clearance. He asked for the cooperation of all landlords, reminding them of the Government’s policy of subsidising their private construction as an incentive to private help.

He encouraged tenants to try and pay their instalments promptly, thus attracting private capital, which would finance more homes. But he said that he was strongly against people owning houses only to rent them out for profi, and would do all that was possible to repossess those.

Robert McGregor, US Ccnsul general, quoted historian Arnold Toynbee: “Our generation is the first to make the benefits of civilization available to the whole human race.” Then he assured the audience that the US Government was not merely soft-hearted, but was interested practically in furthering this aim.

He emphasised that foreign aid, however, could only be an inducement to a country’s helping itself and that only a country that has the courage to help itself can survive.

The Minister of Welfare and Culture, the Hon Dr Glendon Logan, said it was not merely the buildings that made a community, but a sense of responsibility and goodwill to each person.

He said that the Government needed the occupants' assurance that they would not only meet their financial obligations but would try to set a good example for the rest of the area as Jamaica started out on her independent career.

Manley went to the platform amid the strains of Jamaica Arise. He said that he hoped that the association between Jamaica and the United States that had begun with the Trench Town Housing Scheme would continue and bear the fruit that he expected of it.

He repeated that the condition under which the US gives foreign aid is that the country be prepared to help itself; but he added that Jamaica was, in the opinion of the United States Government, making more of its own resources than any of the other surrounding countries.

He said that the Government could attract money by mortgage assurance and in the lower-price range, by Government guarantee, and could help, by offering low interest rates, to satisfy the enormous demand for houses in the £1,500 range. But the Government still had to help those who had no capital at all and who needed houses with cheap rental terms.

The premier expressed his most profound sympathy with those people in need of houses. “We will go as far and as fast as we can.” he said, “and believe me, everyone’s turn will come".

The occupants of the house were introduced by Mrs Nembhard, and the keys were handed over to each occupant by the inspection of the houses, which concluded the ceremony.