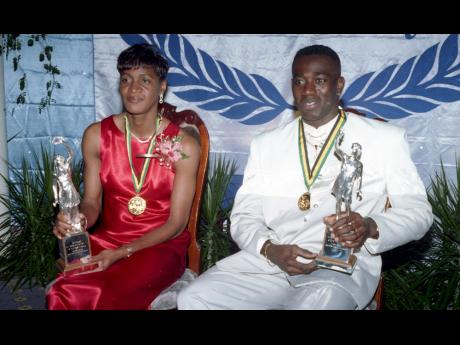 Deon Hemmings (left) and James Beckford at the Carreras Sportsman and Sportswoman of the Year award presentation at The Pegasus hotel on January 25, 1997.

Jamaica's finest were presented with the Sportsman and Sportswoman of the Year awards. Hemmings says she had been working towards the accomplishment since last year, and Beckford shared that he would aim to do much better than he did last yea

JAMES Beckford and Deon Hemmings were crowned Sportsman and Sportswoman of the Year (1996) at the Carreras Sports Foundation ceremony at The Jamaica Pegasus hotel on Friday night.

Silver medallist Beckford, the first Jamaican to win a medal in an Olympic field event, won ahead of Jamaica and West Indies cricketer James Adams, while Hemmings' gold medal in the 400 metres final at the Atlanta Olympics upstaged track legend Merlene Ottey.

Hemmings said she was extremely pleased to be crowned Sportswoman of the Year.

“Last year, I said to myself that I am going to win this time around, but it was going to be very tough,” Hemmings said.

“Ottey has been winning this title for many years, so I knew it was going to take a lot of hard work and dedication to achieve this goal,” she said.

Hemmings, winner of the Olympic gold medal in the 400 metres, where she twice set a new Olympic record (52.99 and 52.82 final), said she would compete in three world meets this year.

Asked whether she could improve on her Olympic record time set last year, Hemmings said: “The only improvement on my gold medal-winning time this year would have to be a world record,” she said. “That’s obvious. That’s the improvement.”

Beckford was delighted with his award and predicted better things to come.

“This year should be a good year for me,” said the 22-year-old Olympic silver medallist. “I will do much better than I did last year.”