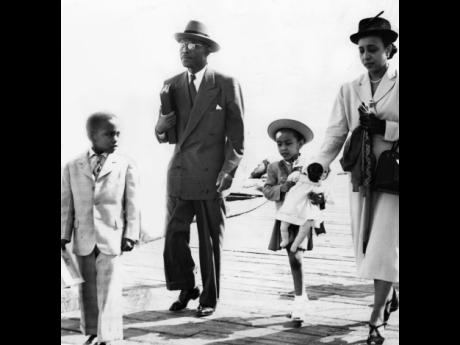 EX-PRESIDENT of Haiti, Dumarsais Estime with his wife, Lucienne, and their two children, Philippe and Marie, as they came off the S.S. Colombie on January 24, 1951, following a six-hour wait on board the ship while high officials of State took a decision on whether they should be permitted to disembark here.

Madame Estime was overcome with emotion as her family arrived in Jamaica on the Colombie. The Estime family was somewhat unsettled after ex-President M. Dumarsais Estime was deposed in 1950. The Haitian government tried to stop the family from landing in Jamaica but The Hon. W.A. Bustamante permitted them to do so.

MADAME Lucienne Estime, wife of the ex-president of Haiti, cried fitfully yesterday morning on board the French liner Colombie as immigration officers detained her husband, M. Dumarsais Estime, and his family on the ship while discussions were held in high government circles to decide whether the ex-president should be allowed to land in Jamaica.

The ex-president, his wife, and their two children were allowed to disembark at 1:40 in the afternoon, nearly six hours after the Colombie had docked at the Hanover Street wharf, and only after the high-level talks had resulted in a one-month permit to enter the island being given to M. Estime. This permit expires on February 23.

Ill-health of the children, Phillipe (7) and Marie (5) had forced the Estime family to leave France, where they had taken up residence after his deposition from the Haitian president in May 1950. He spent the first 10 weeks of this period in New York. The ex-president and his family embarked the Colombie at Le Havre with three visas to their passports – one to the United States of America, another to Cuba, and a third – a three-month visa to Jamaica.

Wants To Live In Peace

Although booked on the Colombie’s passenger list as being in transit to Haiti, that destination was far from the ex-president’s mind. In his own words, he was seeking a place here “I can have peace where my children can live healthily and where they can be educated.”

But before his arrival, anti-Estime forces in the neighbouring republic connected with the present regime had begun to work in Jamaica. An emissary brought letters and other documents and had placed them before the Government here. They sought to bar the ex-president from finding asylum in Jamaica on several grounds, and chief among these was the allegation that he would use the island as a springboard to regain power in the French-culture half of the island a few miles northeast of Jamaica.

However, on his arrival in Jamaica yesterday, the medium-built Estime smiled quietly and said: “No. I am not thinking of going in politics again. I am seeking a peaceful place to settle with my wife, educate my children.”

The moves by the Haitian government, however, seemed to have had some effect on the local authorities. Although Estime had all documents properly documented and in order, mmigration officers refused to pass him through immediately.

Superintendent Noel Crosswell, officer in charge of Iimmigration, took over personal charge of the arrangements and was on the ship soon after it had tied up at the pier. At the same time, he issued orders to keep the press from the ship, and while newsmen and photographers waited patiently for over an hour, he went on board with officers of his department and plainclothes detectives from the C.I.D.

In the meantime, 40 passengers were landed. Only four remained on board, and these were the Estime family.

The police placed plainclothes detectives in and around the wharf premises and had removed from the scene M. Lucien Chauvet, director of the Office of Control and Development of the Development Corporation in Haiti, who is at present in Jamaica and had made representations against Jamaica harbouring Estime.

Immigration officers approached him, asked him if he had a passport, and escorted him to the Immigration Office. He did not return to the wharf.

Other Immigration and C.I.D. men questioned characters thought to be suspicious, while a C.I.D. man kept close to the ex-president and family.

On board the vessel, Superintendent Crosswell questioned the ex-president about his bona fides, examined his papers, and informed him that there were matters of policy arising from his intention to stay in Jamaica. He left shortly after to get further instructions from the Government, and he left behind him a weeping Madame Estime, who hugged her two children and cried fitfully.

“She likes the climate, and the children like the climate”, M Estime explained in French.

The Estime family spent the rest of the time in the saloon on the covered deck of the cruise liner while Gleaner newsmen conversed with them with the assistance of a French-speaking member of the Gleaner staff. The ex-president himself speaks no English. Madame Estime spoke some English; the children spoke none at all.

In the meantime, the matter had been considered at a meeting of the Administrative Committee of Executive Council at Headquarters House. The Hon. W.A. Bustamante, who had been a guest of the ex-president a few months before his deposition, championed his cause. “No Haitian government should be allowed to dictate to us,” he said “The ex-president should be allowed to land here. If he commits himself while he is a guest in this country, then it will be time to deport him.” No decision was taken at the Executive meeting.

At 20 minutes to 2 o’clock, Superintendent Crosswell returned and handed a letter to M. Estime which stated that following a conversation earlier that day in which the ex-president had insisted that he would go on to Cuba or the United States as early as possible, he had been granted a permit to stay in Jamaica for a period of one month, which would end on February 23.

Bags were packed and taken off the ship, and the ex-president and his family set foot on Jamaican soil while C.I.D. men mingled with the crowd, which had gathered to stare curiously at the Caribbean politician.

On To The Hotel

The Hon. I.W.A. Barrant had placed his car at the disposal of the Estime family, and with their baggage following them in another car, they went on to Melrose Hotel ,where they were booked as guests.

There was no indication of how much money M. Estime had brought into the island, but he is reported to have travelled with over 25,000 dollars in travellers cheques.

At Melrose and earlier on the ship M. Estime could not say what plans were for the immediate future.

“I would like to stay in Jamaica," he said. “My family likes it here, and I do, but I cannot say any more for the present.”

That he fears that an attempt might be made in Jamaica to injure him or members of his family was indicated by his attitude soon after arrival when he was apprised of certain movements in the island. He then expressed his reluctance to disembark in Jamaica at all but changed this attitude on the assurance of Mr Bustamante that everything would be done to safeguard his welfare.

A lawyer Dumarsais Estime, 50, was minister of education in Haiti before he became president in 1946. He was deposed in 1950. His wife, 30, was, before her marriage, director of sports in the republic and is a sportswoman with a charming manner. The ex-president himself is medium-height, dark, and with a far-away look in his eyes.