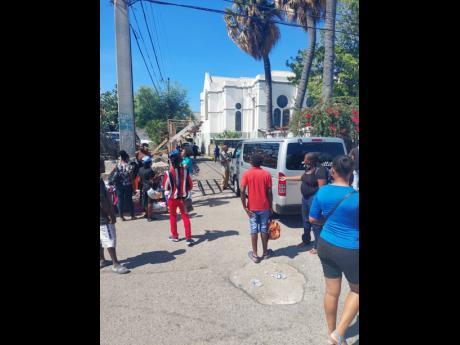 Kingston Parish Church looms large in the background as onlookers gather at Temple Lane in Kingston where a newborn was discovered in the trash on Monday.

Andre Allen-Casey says that there are signs that show that there are persons who are “unable to manage their stressors” which leads to depression. Allen was speaking on the issue of a newborn baby boy that was found wrapped in newspaper in a garbage can downtown Kingston.

10 May 2022/Andre Williams and Kimone Francis

MONDAY’S CHILLING discovery of the body of an apparent full-term baby on Temple Lane in downtown Kingston has caused the police to theorise that the infant was dumped at the location on Sunday, the day mothers across the country were being celebrated.

But more starkly, the discovery casts a light on the presumed financial or mental struggle of women pregnant with unwanted children – a consideration that coincides with local and international debate about the possible rollback of abortion rights in the United States.

The procedure remains illegal in Jamaica.

Dogs combing through trash on the narrow road, bordered by the Kingston Parish Church and Wolmer’s Arcade, exposed the male infant’s body, which was wrapped in newspaper and placed inside a plastic bag.

Investigators are expected to go through hours of surveillance footage of the area for possible clues that could assist with their probe.

A mother of three who was among the first at the scene told The Gleaner that she was startled by the discovery.

“I saw the baby in the body bag and start think, ‘Why a girl would carry the baby for nine months [and] come dump the baby yah so? The baby is very big and pretty, a nice bouncing baby boy with nice, pretty hair,” the woman charged.

“You nuh left it pon a doorstep or carry it go up a the hospital. You know how much people want baby right now.”

That is a question that often draws condemnation in Jamaica’s conservative Christian circles, but it betrays a reality that the prevalence of abortion is often not captured because it happens in the shadows.

Counselling psychologist Andre Allen-Casey has pointed to a correlation between unwanted babies and those at the lower end of the socio-economic ladder.

“They have challenges accessing abortion, primarily because they cannot afford the procedure, and considering that it is illegal,” he

“This may be their fourth or fifth child, and so they can’t afford another. They are already struggling to manage the other children,” he added.

He said where women suffer miscarriages at home, stigma prevents them from going through the designated channel to access assistance.

The unidentified onlooker and mother of three sons, who called the early-morning discovery disturbing, believes the discarded newborn might have gone on to become an upstanding citizen.

“It really touch something inna mi. A better she did bring the baby come give mi. On Mother’s Day? Come on, man,” she said.

“That baby could have been the next prime minister; the next lawyer, the next doctor, judge, Usain Bolt. Think ‘bout dem big star deh nuh man,” said the woman.

A passer-by is said to have stumbled upon the body which was surrounded by the dogs, which alerted residents who called the police.

A large crowd converged at the scene, with many outraged at the find.

But Allen-Casey cautioned that the fear of prosecution has caused women to dump deceased infants instead of reporting the matter.

Allen-Casey said that there has been a noticeable rise in depression among lower- and lower-middle-class people, who have proven to be “unable to manage their stressors”and whose disposable incomes have dried up.

“They are trying to manage two levels of stressors, the lower middle has lost their disposable income while having to work harder and the lower didn’t have any to begin with and they are both overwhelmed because of the pandemic,” he said.

Data obtained from macrotrends show that the birth rate in Jamaica has been on the decline since 2018.