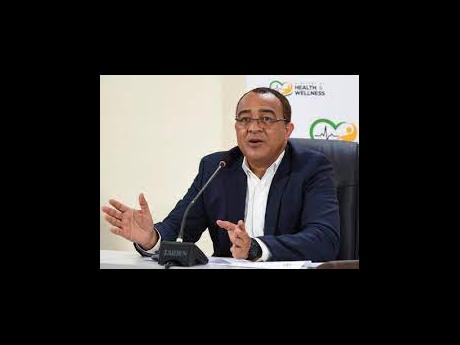 Citizens should be forced to take care of themselves

We have seen several campaigns speaking to NCDs but yet there are still cases of hypertension and diabetes among the population. While the Ministry of Health & Wellness needs to continue the drive to encourage people to eat better and engage in exercise, policies must be put in place as enforcement.

PUT CRUDELY, what Christopher Tufton, the health minister, warned last week was that Jamaicans are digging their graves with their food, and the agency that helps to pay for their medicines when they become sick may soon run out of money.

The data indicate that he is right. The minister, therefore, has this newspaper’s support in his efforts in encouraging Jamaicans to undertake lifestyle changes. In fact, the Government should declare the deepening problem of non-communicable diseases (NCDs), as was outlined by Dr Tufton in his report to Parliament, a fullblown public-health emergency, requiring urgent and special interventions.

That notwithstanding, Dr Tufton must also provide better particulars on the job of the highly respected economist and public intellectual Damien King, who has been appointed to a post in the minister’s health-financing initiative, but whose function we are yet to unravel. It was not clear from Dr Tufton’s statement whether Dr King’s role is as a healthcare economist or a public communication strategist, or both.

Broadly, Dr Tufton repeated what is already widely known about Jamaicans. At least, those of us who care about and listen to information about the state of our health.

As this newspaper has highlighted many times, one in three adult Jamaicans suffers from hypertension. A similar number are on their way to being hypertensive or having high blood pressure. But 40 per cent, four out of every 10, of the people who are already hypertensive are unaware that they have the disease. Not surprisingly, men, 60 per cent of whom do not know that they have high blood pressure, are over two times more likely than women to be unaware of their hypertensive status. Additionally, half of Jamaicans are overweight to obese; approximately 13 per cent of us suffer from diabetes, with an estimated 45 per cent of that group being ignorant of their condition; and 15 per cent have chronic kidney disease.

These NCDs are mainly symptoms of our diets and lifestyles – an increasing consumption of salt, sugars, and fats, combined with too little exercise. And unfortunately, these are not problems only for adults. A survey five years ago showed that a quarter of 13-15 year old children were overweight, with one in 10 of those being obese.

These diseases may not by themselves kill us, but they are major contributors to the cardiovascular conditions that account for seven out of every 10 deaths in Jamaica. And they are debilitating to the economy. Five years ago, a health ministry analysis estimated that over the next dozen to 15 years, it would cost the country nearly J$80 billion in lost productivity and for treating diabetes and cardiovascular diseases. That estimate has been rising.

That Jamaicans do not die more, and earlier, from NCDs is in part because of state support for the drugs, via the National Health Fund (NHF), used for these conditions. The NHF is financed primarily from the 20 per cent of the special consumption tax on tobacco products (around two-thirds of the price of a cigarette represents government taxes); five per cent of the Government’s collection of other special consumption taxes; and up to J$500 million from the National Insurance Fund.

The problem is that the NHF’s continued financing of the rising cost of these drugs, at the current rate, is unsustainable. Seven years ago, for example, the fund shelled out J$4.6 billion in co-pays for NCD drugs. This year, according to Minister Tufton, it will be around J$11 billion – an increase over the period of 139 per cent. The Government projects it will rise another 28 per cent, to J$14.1 billion, by 2025.

It is, however, not only NCDs treatment that the NHF helps to pay for. And the health minister said that given the demand, it would, over the next three years, require J$40 billion or “risk being unable to address the needs of Jamaicans suffering from [many] forms of illnesses”.

Against that backdrop, Dr Tufton’s campaign for people to change their lifestyles, in particular their eating habits, makes sense. But given the broad ignorance in the society of ingredients in processed foods, and the public-policy implications of an unhealthy population, the Government cannot merely adopt an approach of moral suasion on this problem.

It must quickly, and aggressively, implement a nutrition-in-school policy that offers healthy but tasty fares to students, based, as we previously suggested, on domestic agricultural output. Additionally, easily recognisable and understood labelling on the salt, sugar, and fats content in processed foods must also be firmly on the Government’s agenda. And the Government, through ongoing education/information programmes, must help people to decipher the information on food labels and how to recognise and prepare delicious, healthy foods.

We appreciate that even if all these things are in place, Jamaica – where only about a fifth of the population has private health insurance and 720,000 (25 per cent) receive illness-specific benefits from the NHF – will still have a significant problem financing healthcare if all citizens are to have access to decent health services.

The discussion of this matter has been on-again offagain for decades, including Dr Tufton’s 2019 Green Paper on the issue of a national health insurance programme. The minister seems keen on a revival of the discourse.

Dr King, Minister Tufton announced, has been appointed to lead the discussions on financing healthcare and the implications for poverty and the advancement of Jamaicans. He will also“explore health-financing options and assist in the advocacy that is necessary to ensure a more sustainable health financing model”.

The problems, and the implications thereof, are known. Dr King’s expertise, we would expect, would be in the fashioning of technically sound financial and economic solutions. But the specifics of his mandate must be outlined. For the advocacy campaign, that is for Dr Tufton and the communication people.