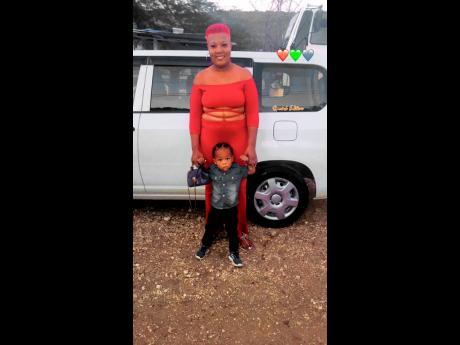 Toddler Jahmeal Mendez has vanished from his home. His mother is appealing to the authorities to take greater interest in the case as she thinks two to three police officers at a time seems inadequate for the search.

How a 2-year-old boy vanished in Clarendon

THE MOTHER of missing two-year-old Jahmeal Mendez believes that a sudden urge to scroll through photos of her young son might have been an omen that something was wrong.

That intuition caused 26-year-old Kera Williams, of Rasta Corner in Free Town, Clarendon, to go checking on her son, who had left for the neighbour’s home, where he usually plays with other toddlers on Thursday afternoon.

Williams said when she called out to him and was told he was not there, she passed it off as a prank.

But when it became clear that everyone was unaware of her baby’s whereabouts, Williams began a frantic search.

A man undertaking construction work at their home indicated that little Jameal came back to the house, but he had not seen him leave, the mother said.

“But somebody else say them see mi baby in the lane stand up by himself, so maybe that’s when them could get fi take the baby,” she said.

The mother said she has not eaten or slept since the younger of her two children went missing.

Searches across several communities across the parish and neighbouring St Catherine turned up empty, with teams combing through sections of Old Harbour, St Catherine, on Saturday. While there, she got word that her baby might still be in Clarendon.

The hunt took them to Sandy Bay, but again, nothing.

Williams is fearful for her child as she said Jameal has never slept without her.

“Everywhere mi go, a me and mi baby. Either me or him father. Like how him go down a mi neighbour house, him nah spend one hour down there. If him miss me, him come check on mi,” the mother told The Gleaner.

She contends that the police are not doing enough to help locate her son.

“The police dem nah push out the most effort fi help look fi mi child. When dem a come, a nuh more than ‘bout three a dem a come. You can’t come with three police fi look fi somebody ... . Come with soldier, police, helicopter, dog, and everything,” she said.

Messages to Deputy Superintendent Antoine-Gur Cardoza, the Clarendon police operations chief, were not answered up to press time.

The mother is also appealing to anyone who might have her son to hand him over, or to leave him at a police station, supermarket, or other public space.

“We nuh have to see them face. A just my baby mi need back. If mi have to do anything fi get back mi baby, mi will do anything,” she said

Referencing a double murder in Rocky Point on May 7, the killing of a hairdresser in Palmers Cross four days later, and the shock death of the Vere Technical High principal on May 12, Charles said the constituency has been dealt a hard blow.

The lawmaker said he has also been working closely with Clarendon South Western Member of Parliament Lothan Cousins to combine efforts in the search for the infant.

Acting on intelligence, the police also raided a community in Clarendon South Western.

“This is a most unfortunate situation, and I think every one of us not only feel concern, but a deep sadness in terms of how the family and community must feel,” said Charles.

He added:“Everyone is putting together and doing what they can, through social media, through phone calls, on the ground ... so thanks to everyone who is pulling together, and let us continue to push.”

Charles is imploring anyone with information to contact the police or other community leaders.

Anyone with information on the whereabouts of Jameal Mendez is being asked to contact the Longville Park police at (876) 902-5047, 119 or the nearest police station.

Statistics from the Child Protection and Family Services Agency (CPFSA) indicate that between 2017 and 2021, a total of 6,686 reports of missing children were made at police stations across the island. Of that number, 5,106 were located, while 1,560 remain unaccounted for.