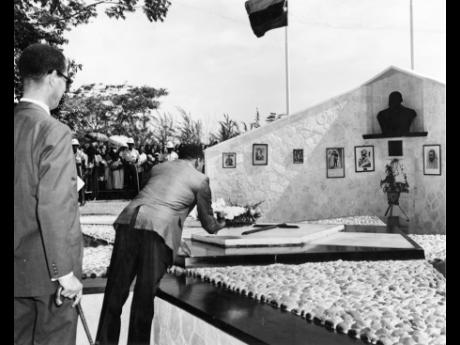 The Rev Dr Martin Luther King (right) laying a wreath at the shrine of Marcus Garvey in the George VI Memorial Park in June 1965 while on a visit to Jamaica. Behind Dr King is Frank Hill, chairman of the Jamaica National Trust Commission.

Dr King took time out of his busy schedule to honour the memory and works of Marcus Garvey. He expressed his gratitude to Jamaica for producing such a hero for black people. He laid a wreath on Garvey's shrine after his brief speech.

Garvey first to give Negroes a sense of dignity – King

“Marcus Garvey was the first man of colour in the history of the United States to lead and develop a mass movement. He was the first man on a mass scale and level to give millions to Negroes and make the Negro feel he was somebody,” the Rev Dr Martin Luther King said at Marcus Garvey’s shrine in the George VI Memorial Park yesterday.

Dr King had just laid a wreath at the shrine in the presence of His Excellency the Governor General, Sir Clifford Campbell; the Hon Edwin Allen who is acting as prime minister, other prominent public figures, and a crowd of 2,000.

He was giving a brief unscheduled speech before leaving for the north coast for a few days’ rest before returning to the United States.

“As we stand here, let us pledge ourselves to continue the struggle in this same spirit of somebodiness in the conviction that all God’s children are significant … that God’s black children are just as significant as his white children. And we will not stop until we have freedom in all its dimensions.

“As I leave this marvellous city and the warmth of your reception, I say once more, thank you for this experience, thank you for the support that you are giving me in the things that I am trying to do in the United States, and thank you for your love for freedom and human dignity. And I say to you this morning, as I say all over America, we shall overcome because God is on our side.”

On arrival, Dr King was met by the Hon Edward Seaga, minister of development and welfare, who introduced him to a number of the distinguished persons present, including Frank Hill, chairman of the Jamaica National Trust Commission.

Dr King was then handed the wreath by Pansy Hart and, accompanied by Seaga and Hill, laid it at the shrine. Later, the group was joined by Amy Jacques Garvey and Eustare White, secretary of the Jamaica branch of the Universal Negro Improvement Association, while they had a close look at framed photographs of Mr Garvey in a variety of poses and uniforms hanging along the wall of the cut stone backing to the north of the mausoleum.

Mr Garvey asked Dr King to tell the people of the United States that “we are one with them”.