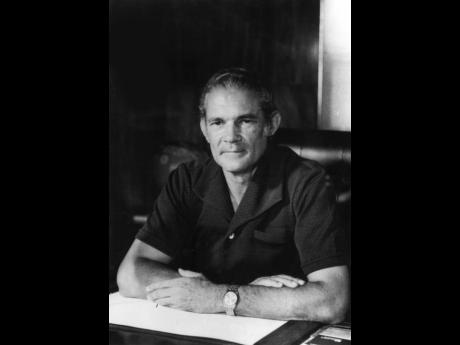 Prime Minister Michael Manley…violence on a scale unique of our history.

Prime Minister Michael Manley is using a new tactic in crime-fighting. He has given additional power to the security forces to arrest persons seen as disruptors and who behave contrary to the law. The State of Emergency, however, does not affect the lives of regular citizens.

A STATE OF PUBLIC EMERGENCY in which the security forces have been given instructions by the Government to use their powers to “lock up and keep locked up all persons whose activities are likely to endanger the public safety, and in particular, the gunmen and terrorists”, has been declared by Governor General, the Hon. Florizel Glasspole, on the advice of the Cabinet.

In announcing the state of emergency, Mr Manley said that the violence in the country had increased to “a scale unique to our history”. At the same time, there were indications that the stage “was to have been set” for even further escalation of the violence, which had already caused innocent people to be murdered in the privacy of their homes, on the streets, and in business places.

Declaring that Government cannot stand by and “allow this sabotage of the country to continue”, Mr Manley said the security forces have been authorised to arrest and detain all persons whose activities are likely to endanger the public safety.

It was important, he said, that the citizens  know that the proclamation of a state of emergency “does not affect normal, lawful, day-to-day activities”. Schools, businesses, and public facilities would continue to function in a normal way.

Before the announcement, the Committee on National Security met and was advised of the projected state of emergency, which had been approved by the committee. The Hon Keble Munn, minister of national security, later met with the Commissioner of Police. Mr Bail Robinson, and the Chief of Staff of the Jamaica Defence Force, Brigadier Rudolph Green, at the joint Operational Command centre, Old Hope Road. At the meeting, it is understood that discussions were devoted to the working out of strategy to be adopted by the joint police and military command, which had been mounted to deal with the violence.

Under the Jamaica Constitution, a state of emergency shall remain in force for 30 days “or for such longer period not exceeding twelve months as the House of Representatives may determine by a resolution supported by the votes of a majority of all members of the House”.

Following are the texts of the statement of the governor-general and the prime minister:

THE JAMICA (CONSTITUTION) ORDER IN COUNCIL, 1962 A PROCLAIMATION

By His Excellency the Most Honorable Florizel Augustus Glasspole, Order of The Nation, Commander of the Order of Distinction, Governor General of Jamaica.

WHEREAS by virtue of Section 26 of the Constitution of Jamaica, the Governor-General may issue a Proclamation declaring that a state of emergency exists if he is satisfied that action has been –taken or is immediately threatened by any person or body of persons of such a nature and on so extensive a scale as to be likely or to deprive the community or any substantial portion of the community of supplies or services essential to life:

AND WHEREAS I am satisfied that action has been taken and is immediately threatened by persons of such a nature and on so extensive a scale as to be likely to endanger the public safety and to deprive the community or a substantial portion of the community of supplies or services essential to life:

NOW, THEREFORE, I, FLORIZEL AUGUSTUS GLASSPOLE, Order of the Nation, Commander of the Order of Distinction, Governor-General of Jamaica, by virtue of the above-recited section of the Constitution of Jamaica and of every other power me thereunto enabling DO HEREBY PROCLAMATION MAKE KNOWN that a state of emergency exists.

Given under my hand and the Broad Seal of Jamaica at King's House this nineteenth day of June, in the Year of Our Lord one thousand and nine hundred and sixty seventy-six in the Twenty-fifth Year of the Reign of Her Majesty Queen Elizabeth 11.

Over the past several months, we have witnessed a type and scale of violence unique to our history. This has included terrorist activities previously unknown to us, which has driven fear and concern into the heart of every decent Jamaica citizen.

We have seen for the first time in our history children being armed. We have seen innocent people murdered in the privacy of their homes and on the streets, business places held up and robbed, and offices and dwellings razed to the ground on a scale completely beyond anything in our experience. This loss of life and destruction of property has continued despite the great efforts made by our security forces and decent citizens to maintain law and order.

These wanton and ruthless activities have had the effect of not only creating fear throughout our country, but have been slowly bringing the economy to a halt.

There are also indications that the stage was to have been set for these activities by launching a series of false allegations, based on carefully staged events, designed to undermine confidence in the lawfully elected Government and the constitutionally established security forces of the nation.

These events and allegations would be the basis for rumor-mongering, further contentious actions, and most devastating as a cloak for escalating the violence, which has already played havoc with our society.

We cannot and will not stand by and allow this sabotage of our country to continue. As the democratically elected and duly constituted Government of this country, we are provided under the Constitution with certain powers to deal with the extreme situation that the country now faces.

The government is satisfied that action has already been taken, as this had now threatened, on such a scale as to endanger public safety. This demands that we exercise the full powers vested in the Government under Sections 32 and 26 (5)(b) of the Constitution.

Under the State of Public Emergency, the security forces are authorised to arrest and detain all persons whose activities are likely to endanger the public safety.

The security forces have been given instructions to use their powers under this state of emergency to lock up, and keep locked up, all persons, and in particular, the gunmen and terrorists, without regard to political and other affiliations, real or pretended.

Every person detained will have the right to have his case reviewed by a tribunal, which is empowered to make recommendations to the competent authority for his release or further detention.

It is important that everyone should know that the proclamation of a state of emergency does not affect normal lawful day-to-day activities. It is expressly designed to give further powers to the security forces in their fight to maintain law and order. For example, schools will remain open; businesses will function in a normal way, public transport, airlines. Government offices, construction and all facets of social and economic activity will function in a normal way.

Next week, I will report to Parliament on the situation and provide further information. Parliament and the nation will also be provided with the detail of the machinery that will be set up to administer the state of public emergency, I call upon the nation to be calm and strong and to give full cooperation to the security forces.