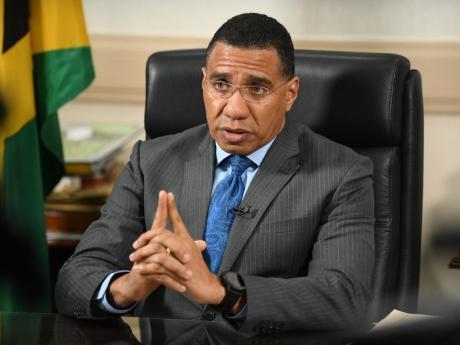 Prime Minister Holness says his administration will continue to provide support for the poorest in the country until the economy stabilises. He also expressed disappointment in the Opposition's argument regarding the current management of the economic crisis.

SMARTING FROM criticism of his handling of the country’s affairs, Prime Minister Andrew Holness has accused the parliamentary Opposition of seeking to exploit Jamaica’s swirling crises for “political one-upmanship”.

The Government has been under pressure to cushion the throes of double-digit inflation, which has sent the prices of food, fuel, and other commodities spiralling with the administration in midterm.

But Holness rebuked critics sympathetic to the Opposition of spinning a convenient narrative that ignored the geopolitical shocks that have rattled all economies.

“The entire world is convulsed in great difficulties as it relates to volatility in energy prices and constant increases in energy prices, ... and the increased cost of food. It is having a generally devastating impact

on the economies and societies right across the world, and we have not been spared,” he said during an address at the launch of the Isratech Superstore in Manchester on Wednesday.

The Opposition has pressed for the minimum wage to be raised to $12,000, a third higher than the current rate, to which it was elevated earlier this year. Spokespersons have also lobbied for a reduction of fuel taxes, which gas retailer interests say represent nearly half of pump prices.

United States President Joe Biden on Wednesday called for a freeze on federal gasolene and diesel taxes until September, but that lobby is not expected to get the approval of Congress.

Holness has, however, cautioned Jamaicans that there is no one-size-fit-all approach for every economy.

“Some countries have decided to apply fiscal measures in trying to cushion the increase in prices. They have, for example, reduced the cost on fuel on food items, and some countries can do that without fiscal impact on their revenues,” the prime minister said.

Alluding to the 20 per cent discount the Government has gifted to 450,000 low- and middleincome households consuming up to 200 kilowatt-hours of electricity per month, Holness said that no political administration had provided that quantum of support to average Jamaicans.

Harking back to the era of austerity under the previous Simpson Miller administration, Holness said that the then Government did not respond to the belt-tightening dilemma with similar welfare packages.

Holness took a jab at members of the Opposition for having all the solutions when they were not in power.

“We went through this in 2011 to 2014 when we had a massive devaluation in our dollar and massive food price increases. When did the Opposition offer any care package or support?” he questioned.

“... They weren’t able to do it even if they wanted to because they didn’t have the resources.”

Insisting that the economic fundamentals of the country were strong, with record-low unemployment of 6.1 per cent, Holness said his administration would be delivering new cash grants to the poorest until crises in the geopolitical arena stabilise.

Holness cast his leadership when in Opposition as responsible and mature, hinting that his counterpart, Mark Golding, held a contrary posture.

“The records will show that as long as it was in the interest of the country, I put aside the politics and I supported. Whether it meant to have legislation passed or to offer no objections, or be there upfront advocating. I think the country needs that at this time,” the prime minister said.