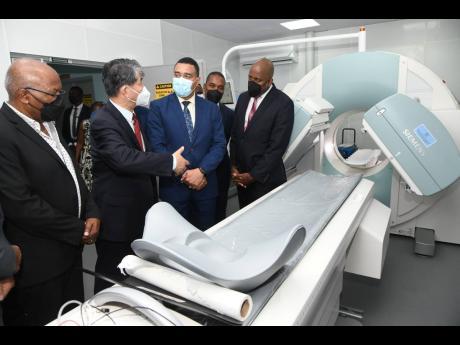 Prime Minister Holness says that it is crucial to push persons to study STEM subjects so that the country can fill the gap created by the migration of our medical personnel.

JAMAICANS NOW have the opportunity to access advanced diagnostic services for cancer and cardiac diseases at the newly reopened Nuclear Medicine Division at the University Hospital of the West Indies (UHWI).

The International Atomic Energy Agency (IAEA) provided equipment for the facility to the tune of US$750,000 (J$114 million). The UHWI spent J$100 million on the infrastructure.

Medical chief of staff at the UHWI, Dr Carl Bruce, told The Gleaner Thursday that the facility will be a game-changer for the hospital.

He noted that the division is strategically located beside the Women’s Imaging Centre, where mammography is carried out to diagnose breast cancer.

“And now what this does for us is that those who are diagnosed with breast cancer immediately in the same building, we can now stage the breast cancer and determine the appropriate treatment,” he said.

“It adds a layer of efficiency in that the patient is now in the same facility that they have been diagnosed, and biopsy is done, and now staged and ready for treatment, whether it be surgery, radiation, or chemotherapy,” he explained.

Bruce told The Gleaner that Jamaicans will be able to access the facility at a much lower cost than the sum they would pay overseas.

The medical chief of staff said that many patients who needed a single-photon emission computed tomography (SPECT), computerised tomography (CT) scan, had to travel overseas previously. A SPECT-CT is a test that uses a special type of camera and tracer to look at organs or bones in the body.

Bruce said that the quality and standard of care for those patients with cancer have dramatically improved because the nuclear medicine division is already functioning.

According to Bruce, if someone had a cardiac arrest, the facility can now determine how the person’s heart is functioning and how much muscle damage has been sustained.

“We also have it attached to a treadmill so we can also do a stress test (get the patient to do a little exercise) to look at the quality of the patient’s cardiac function,” he pointed out.

For children with frequent urinary tract infections, Bruce said that the facility had equipment that could now help in the review of kidney functions.

Additionally, for persons with thyroid or parathyroid disease, the equipment allows doctors to localise the tumour without checking all four thyroid glands.

“So we have now transformed that surgery into a more minimally invasive surgery rather than exploring the entire neck,” he added.

He said that nuclear medicine enables the early diagnosis and treatment of cardiac conditions and cancer, which can mean the difference between life and death.

Holness observed that cardiovascular diseases and cancer are two of the leading causes of death in Latin America and the Caribbean, accounting for approximately half of all deaths.

The prime minister said that one of the challenges that Jamaica continues to face is the migration of medical personnel. He said it was one of the main reasons for the closure of the previous nuclear medical facility at The UHWI in 2002.

“This is why we should undertake a major push to educate and train a greater number of Jamaicans in STEM (science, technology, engineering, and math) disciplines,” said Holness.