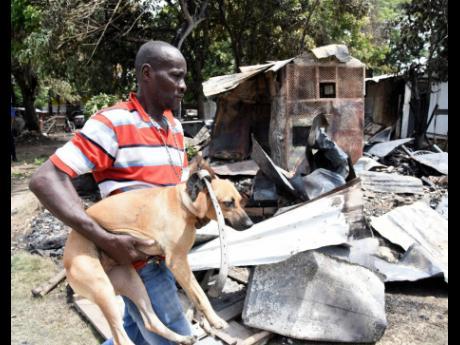 Donovan Anderson, a resident of Mexico in Gregory Park, St Catherine, carries his dog to a waiting truck on Thursday after 11 houses were burnt to the ground in firebombing attacks. Anderson says he does not feel safe anymore and was moving out of the community.

Residents have been moving out of the 'Mexico' area of Gregory Park in Portmore because of the increase in crime. More than 10 houses were firebombed in the area over two days. There was a shoot-out with some of the criminals that led police officers to their headquarters in the bushes.

LASCELLES ANDERSON was not home on Thursday morning when his house was set alight. Its burnt-out shell now stands among more than a dozen razed by gunmen since Tuesday in the tense Mexico area of Gregory Park in Portmore, St Catherine.

“Everything gone,” he said as he looked at the wreckage that was once his home.

“All mi cars parts. Everything in a one bag with all mi papers. Jesus Christ, everything!” Anderson bewailed, trying to process the reality that, like many other families, he was now homeless.

As fear gripped the community, several residents who had not been directly affected by the fires began packing up to escape the crippling mood blanketing Mexico, fearing that the assault was not yet over as warring factions square off.

The police were alerted to a gang of hoodlums

returning from a hellish mission in which eight homes were torched on Thursday morning. Three other homes had been torched days earlier.

The criminals were reportedly on their way to a camp they had established in bushes off Dyke Road.

When the police came upon the men, a gunfight reportedly ensued, leaving one man injured as two of his cronies escaped in the bushes. The man later died.

A search of the area resulted in the recovery of four assault rifles and two handguns – two shotguns, one M16 assault rifle, one AK-47, a Taurus pistol and a 380 pistol.

“When we went into the area, it was obvious that it was the headquarters or a base for the criminal syndicate operating in that area,” said Senior Superintendent Christopher Phillips, head of the St Catherine South Police Division.

The police are seeking Shane Williams; a man who goes by the name ‘Teacher’; Imaro Mckenzie, otherwise called ‘Munga’; and Kirk Wint, also known as ‘Big Red’, for questioning as they continue their investigations.

A curfew instituted in Gregory Park since Tuesday, after the first four homes were firebombed, is expected to continue.

In a separate incident on Thursday, the police reportedly cornered two gunmen who had allegedly shot a man in the Browns Avenue area of Central Village.

The men reportedly fired at the cops, who fatally shot one assailant and recovered a Glock pistol. His accomplice escaped.

Assistant Commissioner of Police Gary Griffiths, who visited both scenes Thursday, said that the Central Village shooting was sparked by a feud over work being given out in the community.

“The police will be relentless in their efforts to apprehend the men,” Griffiths said.