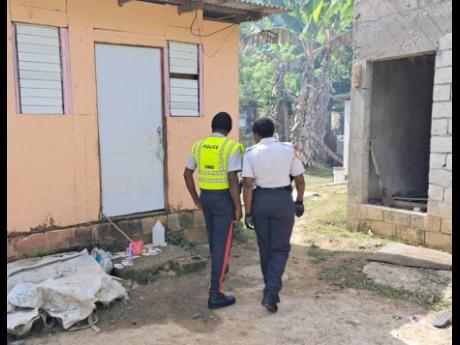 Two cops from the Sandy Bay Police Station in Hanover outside the house where Venesha Oreggio and her partner, Miguel Wilmot, were shot and killed in Hanover

Police impersonators shot and killed a couple hours before daylight on Emancipation Day. They left the location with an undetermined sum. There was also another crime scene in the vicinity, where another man was shot and killed.

Three slain in bloody start to August in Hanover

A MOTHER of five and her common-law husband were among three persons shot dead by gunmen in Hanover on Emancipation Day.

Police reports are that about 3 a.m. on Monday, Oreggio and Wilmot were awoken by knocking on their two-apartment board house with the men outside identifying themselves as police officers.

The couple was ordered to open the door, following which the police impersonators shot them both in the head, killing them on the spot.

The assailants then ransacked the house and reportedly made off with a sum of cash, which Oreggio had been keeping as a banker in a partner scheme.

Oreggio’s father, Lloyd Oreggio, said that he and his infant grandson, who were asleep in an adjacent room, were also awakened by the banging and shouts of ‘Police!”

“My daughter seh, ‘Who is that?’ and dem seh, ‘Police’,” the grieving father recalled.“so she seh,‘push the door’, and then a pure shot mi a hear. So mi in yah so and a bawl out seh, ‘Officer, a mi and mi four-year-old grandson in yah so’, and the shot dem stop.”

The senior Oreggio said his daughter was a genuine person, who did not keep a lot of friends.

“People fi get dem [partner] draw right yah now,”he added, telling The Gleaner that he believes robbery was the motive for the deadly attack.

The senior Oreggio revealed that his daughter had previously lost two fathers to her children, the first in a stabbing incident in Haddington, Hopewell, a few years ago, and the second was killed with his brother, also in Pumpkin Bottom.

“Now she come meet her death wid this yah man yah,” he said, cursing her luck with men.

While investigators were on their way to process the scene of the double murder yesterday, gunshots rang out in another section of the area, known as Barbican.

It is reported that Mcdonald was also asleep at his home when gunmen rode into the community on motorcycles and forced their way inside the dwelling.

The attackers shot him multiple times, before searching the house then making their escape.

The police say Wilmot and Mcdonald were known violence producers in the area, and have been picked up, interviewed, and released on several occasions, but never charged.

In the case of Mcdonald, he was convicted for illegal possession of a firearm several years ago.

The police have not disclosed a motive for the killings, as they continue their investigations.

Twenty-five people have been killed in Hanover since the start of the year.