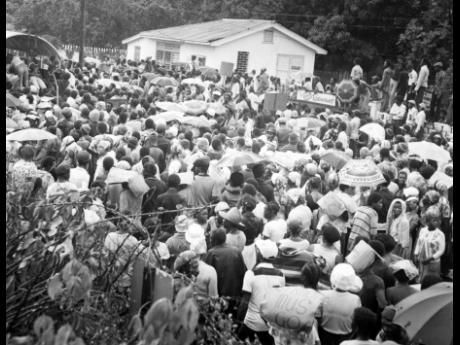 ANTI-CUBA JLP demonstrators carrying placards reading “We Jamaicans don’t love communists”, and other slogans at the corner of Hope Road and Lady Musgrave Road on September 24, 1979.

Police were kept busy trying to maintain order in Kingston as angry protestors lined the streets. Tempers flared leaders of the political parties and their supporters in the streets trying to get their voices heard.

Police in Kingston used tear gas this afternoon to break up a stone-throwing clash between JLP supporters demonstrating against Cuban Ambassador Ulises Estrada and pro-Cuba demonstrators made up of PNP and Workers Party supporters.

The use of tear gas by the police averted what could have been a more serious situation on Lady Musgrave Road, near to Hope Road, involving thousands of demonstrators.

The demonstrators regrouped, with the JLP going to their Belmont Road headquarters and the PNP supporters going to Jamaica House gate, where they were later addressed by Prime Minister Manley.

Later, a crowd of PNP supporters, including several Ministers of Government, staged an anti-Gleaner, pro-Cuban demonstration in front of The Gleaner building, North Street.

The demonstrations began before 11 o'clock yesterday morning with JLP supporters marching on the Cuban Embassy at 9 Trafalgar Road, bearing anti-Estrada placards and calling for his expulsion.

On Tuesday, Ambassador Estrada had called a press conference at his embassy where he accused the JLP and the Gleaner of spreading lies against him. He threatened a Cuban reaction. The crowd, including Senator Pearnel Charles, General Secretary Bruce Golding, and NDM chairman Michael Williams and Ed Bartlett of the Jamaica "Freedom League, among other JLP "officials distributed hundreds of pamphlets and chanted: "Estrada must go."

Around 11:35 a.m., the crowd moved on to Knutsford Boulevard to the Ministry of Foreign Affairs, New Kingston. Along the busy street, hundreds of people rushed to the windows of their high-rise offices to watch the sea of people below.

Hundreds of pamphlets critical of Prime Minister Michael Manley were also distributed along the way. As quickly as some of the pamphlets were thrown on to the street, they were picked up, apparently by a van with PNP supporters. Some of the placards read "Estrada DGI agent," "DGI help PNP to Kill," "Estrada DGI Spy," and "Manley sold Jamaica for less than 30 pieces of silver”.

The crowd was, during this time, escorted by the police who followed it along Oxford Road to the offices of the Jamaica Daily News and the Agency for Public Information. The demonstrators then went along Half-Way Tree Road to the Jamaica Broadcasting Corporation on South Odeon Avenue. The group then moved on to Jamaica House, where the Prime Minister has his offices, and there, they staged a brief demonstration.

Around 12:30 p.m., the JLP supporters were returning to their Belmont Road headquarters when they met a PNP demonstration along Lady Musgrave Road.

By this time, the JLP supporters had caused a traffic jam at the intersection of Old Hope Road and Lady Musgrave Road. As they turned on to Lady Musgrave Road, they were met by a group of PNP supporters on their way to Jamaica House. Neither group would give way, and as they squared off, with the police caught between them, incidents of stone-throwing began between both groups.

For over an hour, Police Supt Logan and the political leaders tried to work out a solution of the separate routes to take, A suggestion by Mr Logan that both sides return from whence they had come was rejected.

By this time, PNP supporters had arrived with MP Portia Simpson. The PNP crowd had been swelling by this time, with supporters arriving in dumper trucks.

Stones were thrown at the JLP supporters, shots were heard a little after 1:00 p.m., and the police discharged tear gas into the crowd, which fled in all directions. As the crowd panicked, orders of "Get down!", "Keep down!" were shouted. Before that, the crowd had been about 20 feet apart.

After the tear gas smoke had cleared, National Security Minister Dudley Thompson appeared at the "no man’s land” occupied by the police and separating the two factions and was engaged in a heated exchange with Dr Mavis Gilmour, JLP MP.

Later,  the PNP demonstrators staged an anti-Gleaner, pro-Cuba march on The 'GLEANER.

JLP party secretary Bruce Golding later told The Gleaner that a shot was fired at the JLP crowd at Jamaica House. He also said that the shots that were fired at Lady Musgrave Road came from the PNP faction.

He said the JLP demonstration was in protest against threats against the JLP by the Cuban Ambassador and that there would be more demonstrations until this undesirable alien departs from our shores. He commended the police for the manner in which they handled the situation.

Opposition Leader Seaga told his supporters at party headquarters that he was planning a public meeting for Sunday at a venue to be announced.

The demonstration before The Gleaner building lasted more than an hour.

The crowd that began to converge on North Street facing The Gleaner from shortly before 5:00 p.m. bore placards with the signs "Cuba and Jamaica United Against Imperialism", and "Cuba y Jamaica Unidos Venceran" and carried miniature flags of bright red.

At the height of the demonstration, which was addressed by the PNP Youth Organisation general secretary Mr Sheldon McDonald, the crowd chanted, "Freedom of the Press, yes, but no more lies.”

PNP President, Prime Minister Michael Manley, headed a line-up of government Ministers and top party officers who were among the demonstrators.

Mr Manley said "Let them learn, freedom of the press, yes, but no more lies ... But next time, next time, be alert and listen for the next time."

During the demonstration, the crowd sang, "You wrong fe trouble Joshua", "The Red Flag", and chanted, at different times, "Socialism, yes, The Gleaner, no,' and "Michael, yes Seaga, no."

Keeping a watchful eye on the demonstration, which went off without incident, were Riot Squad policemen of the Mobile Reserve.

The demonstration broke up shortly after Mr Manley spoke to the group and ended with the singing of "Forward March Against Imperialism".