Mother of three appeals for help to fix home 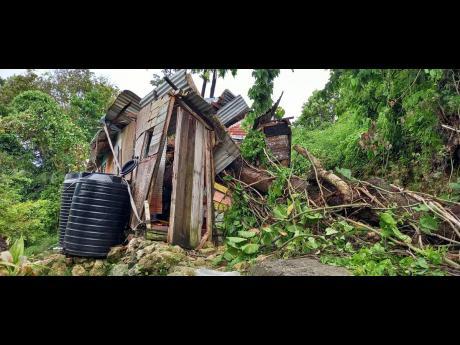 A single mother is seeking the public's assistance to rebuild a part of her home that was damaged by a tree. Linneth Jackson and her children were quite shaken up as heavy rains caused a tree to crash in her three-bedroom board structure. One of her sons was injured in the incident.

A PREGNANT woman and her Portland family narrowly escaped death after a large tree crashed into their three-bedroom board house at Janga Gully road in Boundbrook on Sunday, smashing furniture and electrical appliances.

It was a frightening experience for 51-year-old Linneth Jackson, who said that she was jolted by a sound shortly after 6:30 a.m. at her house, which she shares with her two teenage sons and daughter.

Recalling the near tragedy, Jackson said she was preparing to make Sunday morning breakfast when the incident happened.

Jackson said that she sprang to her feet and went to a bedroom occupied by one of her sons, who is asthmatic.

She followed his moans and found him trapped. He was eventually freed by the family.

He was limping from the injury, but she said that the rain prevented them from taking him to the hospital.

“Everybody else was somewhere in the living room, and my pregnant daughter was quite shaken up. She was shaking all over and I was worried about her condition,” Jackson told The Gleaner.

“After rushing into the room, mi realise that the big tree on the outside drop inna di house, and I started to cry out to the Lord. My son, was injured and frightened, but he was alive. It must have been the good Lord that allowed for him to be alive as he was sleeping when the tree crashed into the house.”

The mother received two sheets of tarpaulin from the Red Cross to cover her rooftop as water was pouring into the bedroom and parts of the living room.

A single parent, Jackson is appealing for help to repair her home. She said she was thankful to God that Jamaica was not significantly affected by the outer bands of Tropical Storm Ian, which scoured Boundbrook with heavy rain and occasional gusty winds.

The walls of one bedroom are at risk of collapse under the weight of the fallen tree.

Jackson is appealing for help to rebuild the bedroom and a section of the living room. She is also needful of assistance to have the tree removed from the house.