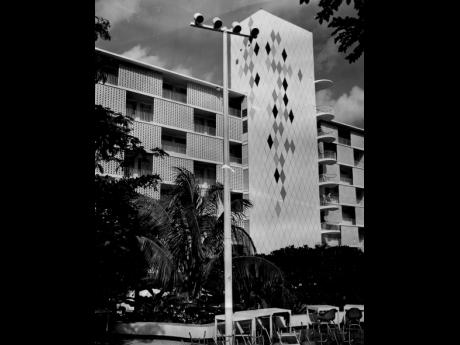 A back view of the Casa Montego Hotel.

The Jamaican government made major investments in two Jamaican hotels. Minister of Industry, Tourism and Foreign Trade, P.J. Patterson, made a commitment to protect the employment of citizens in spite of the problems with the industry.

The Jamaican Government has acquired two of Montego Bay's leading hotels, the Casa Montego Hotel and the Montego Beach Hotel, for an overall sum of $4 million. The nine-storey, 213-bed Casa Montego has been bought for $2.5 million and the 194-bed Montego Beach for $1.5 million. This was announced yesterday by the Minister of Industry, Tourism and Foreign Trade, the Hon P.J. Patterson, when he addressed workers from both hotels together with union officials and members of the news media, in the Montego Beach Hotel penthouse.

The minister said that the Government had concluded an agreement with Trafalgar House, owners of Montego Beach, for its acquisition and the hotel would be opened for December 1, this year. The hotel would be open throughout the winter season and would be operated through National Hotel and Properties Limited.

It was the Government's intention, Mr Patterson said, to close Montego Beach Hotel after the winter season for refurbishing, the reason being that the hotel was originally opened as a five-star hotel. The hotel had been "badly run down", hence the Government's plan to completely renovate the complex in order that it might be restored to its original condition. Thereafter, the minister said, it was hoped that continuous operations would ensue.

There were no immediate plans renovate Casa Montego, since it had been recently renovated and consequently it would remain in operation. This hotel would be used for the "spillover business between Montego Beach Hotel and Trelawny Beach Hotel – the latter recently acquired by the Government.

Speaking on some problems in the hotel industry Mr Patterson said that the Government was committed to a policy of employment for its people and further protections of this employment.