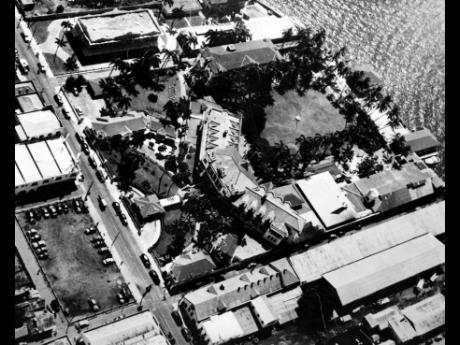 There was a spirit of gloom around the Myrtle Bank Hotel as persons performed tasks for the last time. Visitors and workers were saddened by the closure of the hotel. Workers had no idea where their next paycheques would come from.

The Myrtle Bank Hotel completed its last full day of operations yesterday and another last-minute appeal was made to the prime minister to keep the hotel going.

After breakfast, today and lunch for Rotarians only as a final gesture, an era spread over some 90 years will end. Fifteen remaining guests will have checked out by noon.

“Executive committee People’s National Party direct reminder your Government used £1 million to assist foreign interest to preserve Arawak Hotel. Much smaller sum loaned to local reputable businessmen would save Myrtle Bank Hotel, hotel workers, taxi men, women straw workers, and others depending on hotel’s operation.” It was the second appeal in a week to the prime minister by the PNP in a bid to save the hotel.

Earlier efforts by a committee of businessmen with an option to purchase the hotel, collapsed last week when they failed to raise £500,000 before the option expired on Saturday.

The only remaining business at the Myrtle Bank after today will be in the offices and shops occupied by tenants at the front of the premises.

A spokesman said that there were no other immediate plans for the 150,000 square foot seafront site valued at about £500,000.

But “tremendous behind the scenes activity” is going on to sell the Myrtle Bank as real estate or as a hotel and it is being advertised here and abroad, the spokesman said.

In the meanwhile, fixtures and furnishings are being kept intact and under adequate security arrangements. A skeleton accounting staff will remain employed through October after the rest of some 130 hotel and laundry workers become redundant at the end of this week.

Some 90 patrons sat to lunch at the hotel yesterday on what general manager Mr Nick Brimo described as a “very nostalgic occasion for the regular patrons who came in for the last drink and the last lunch”.

Judging from the telephone calls he had received, more would have come, but the rain kept them away he said.

The Kingston Rotary Club, which has used the hotel for its regular Thursday luncheon will meet there again today. The last luncheon to be served by the hotel will be served to them “as a parting gesture”.

The Rotarians will continue to use the hotel ballroom for another month and will be catered to from outside.

The Myrtle Bank has served as a meeting place and downtown social centre since its inception about 90 years ago by James Gall, a journalist who named it after his Scottish home.

It was taken over by the United Fruit Company at the turn of the century. It was rebuilt after the 1907  earthquake destroyed it and the present annex was added in 1930.

The ISSA interest bought the hotel in 1943 and its importance as a social centre grew through the 1950s. The owners announced in August that they were closing down because of declining business.

The longest-serving waiter at the hotel, Mr Theodore South, said yesterday that he feels “great regret” at the closing. He joined the hotel in 1926-27 when the U.F.Co. owned it. Married and with five children he has not yet found another job, he said yesterday.

A foreign guest who first stayed at the Myrtle Bank years ago also expressed sadness.

Mr Nigel Clifton, an Englishman who now lives in Salisbury, South Rhodesia, summed up his reaction this way:

“It was a landmark. This was a good pub. How they can let this place go is really beyond me."

He sat in the Caribbean Room Bar sipping the last beer available in a dwindling stock of drinks.

Bartender, Mr Byron Gray, 50, with 15 years of service at the hotel, served the colonel. Asked his reaction to the closing he said: “I feel awful, very bad about it.”

Other employees expressed concern about the possibilities of jobs elsewhere.

Several time negotiations on their behalf will continue between the management, the National Workers Union and the Bustamante Industrial Trade Union next week.