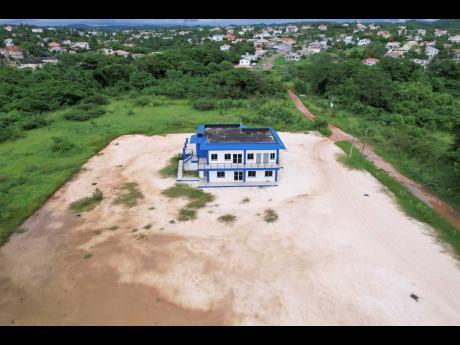 The Green Acres Police was an island in the sea created by the heavy rains dumped by the passage of Hurricane Ian. It has since been disclosed that it will take approximately $70 million to construct a proper drainage system for the facility before it can be opened.

THE MINISTRY of National Security is expected to spend $50 million to $70 million to install drainage, sewerage, and fencing infrastructure that has delayed the opening of the Green Acres Police Station built on lands donated by the citizens’ association.

That expenditure, which could rise, will be specific to the station lands itself, but the scope of infrastructural works will not incorporate the wider Johnson Pen lands that were flooded last week. The total fix was estimated at $260 million in 2021.

The area’s flood risk stirred controversy after heavy rains whipped up by Hurricane Ian swamped acres land where the $73-million building is sited, raising questions about the decision to complete construction without the requisite drainage infrastructure being installed.

Delroy Simpson, chief technical director for the Security Risk Reform & Transformation Policy Division, said the ministry has retained a civil-structural engineer who will produce an enhanced drainage design for the police station, which is 95 per cent completed, with some fixtures still to be installed.

“A procurement process was launched to retain a suitable contractor to complete the external work, which will include the construction of the drainage system as recommended by the engineer,” Simpson said in an emailed response to queries by The Gleaner.

Simpson said that floodwaters did not enter the facility and that no damage was sustained during the storm rains.

A timeline for the station’s opening is still unclear, but the chief technical director disclosed that the facility would be ready within four months of completing the procurement process and the signing of an external works contract for drainage, fencing, sewage disposal, and asphaltic concrete, among other components.

Simpson said that the National Works Agency would be engaged in the drainage plans for the wider community.

When contacted by The Gleaner, NWA Communications Manager Stephen Shaw said he was not aware of new dialogue concerning the drainage build-out in Johnson Pen.

“I am not saying that these discussions are not taking place, but they have not yet reached my desk,” Shaw said.

Former president of the Jamaica Institution of Engineers, Gary Walters, has warned that any attempt to undertake isolated drainage for the police station will not solve the flooding problem in the area.

“To look at putting in a drainage system for the Green Acres Police Station and not consider the impact of all who will be affected downstream is only kicking the can down the road,” he said in a Gleaner interview Sunday.

Walters said that the engineers should study the overall drainage patterns of Johnson Pen and determine whether the Green Acres Police Station is located in a natural stormwater run-off and channel the water appropriately.

“They must bear in mind that without this assessment, the flooding problem they are trying to correct at the station will affect other areas,” Walters said.

Residents and commuters have for years been plagued by the Johnson Pen flooding, which renders a section of St John’s Road impassable when it rains heavily.

President of the Green Acres Citizens’ Association, Venessa White-barrow, has also said her membership had made it clear to the national security ministry that the area was prone to flooding and that officials should have done their due diligence before they began construction.

“Nobody listens. Hence we are faced with this problem,” said Kamau Kambui, an architect living in the community for 23 years who was at the forefront of the plans to erect the police station.