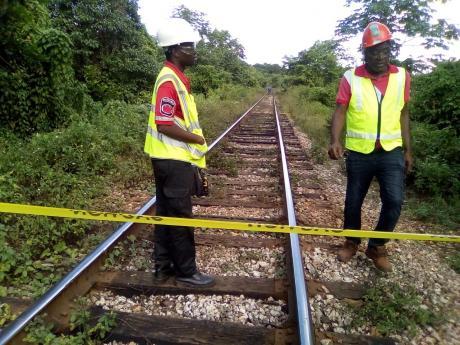 Operations were halted at Discovery Bauxite Partners following a deadly train crash. Two employees died after the locomotive on which they were travelling derailed. The company has ordered an investigation into the matter to ascertain the reason behind the accident.

TWO MEN died on Sunday night after a Discovery Bauxite Partners locomotive they were travelling on derailed in Retreat, a community roughly two miles west of Brown’s Town in St Ann.

The deceased have been identified as Orlando Brown, of an Orange Hill address in Brown’s Town, and Shein Powell, a security guard, formerly of a Clarendon address and who was attached to a firm contracted by the bauxite company.

In the wake of the tragedy, the company suspended all rail operations, pending the completion of a preliminary assessment.

It is unclear how the suspension will affect production at the company’s facilities in a sector that is expected to produce 6.5 million metric tonnes this year, an increase from the 5.9 million tonnes produced in 2021.

Reports are that the incident occurred about 11 p.m. on Sunday.

A release from the company said that personnel alerted its emergency team as well as the Jamaica Constabulary Force and the Jamaica Fire Brigade after the switcher locomotive derailed.

Brown and Powell, who were found unresponsive at the scene, were transported to the St Ann’s Bay Regional Hospital, where they were pronounced dead.

When The Gleaner visited the community on Monday, a heavy security presence prevented access to the crash scene, which is located in a dense, scarcely populated area and was cordoned off.

Discovery Bauxite said it has assembled a senior team to investigate the cause of the accident.

The company added that it was reaching out to the bereaved families to offer support.

“We share their grief and offer our prayers and support for their comfort and solace at this time . ... Our condolences are with the families, friends, loved ones and colleagues of our two co-workers,” a statement from the company read.

Discovery Bauxite’s vice-president and country manager, Delroy Dell, acknowledged that employees have been rattled by the incident.

“I urge you to remain focused as we carry out the necessary investigations into the circumstances surrounding the incident by the relevant internal and external authorities,” Dell told employees.