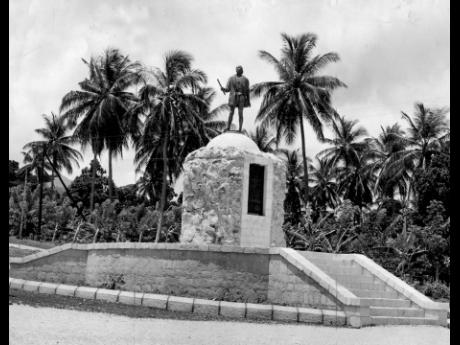 Towering into the sky, the monument of Christopher Columbus dominates the scene on the main road just outside St Ann's Bay. 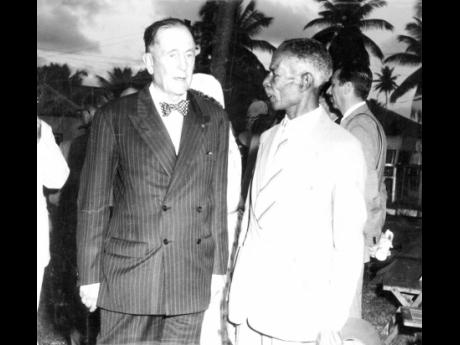 A chance meeting at the ceremony of blessing of the Christopher Columbus Monument at Seville, St Ann's May, on November 21, 1958, two United States Navy veterans of World War I, an Admiral and a former wardroom steward, met. They were Rear Admiral Elliot Morison USM (ret) (left) and Mr Leslie Steele, a Jamaican who served under his command. Mr Steele, a resident of St Ann's Bay and the father of Rev George Steele, superintendant of the Morant Bay Methodist Circuit, was thrilled when he learned that his former chief is now the official historian of the monumrnt's dedication ceremony. He armed himself with his service papers and photographs of USS Robinson, USS Graham and USS McCormick, warships of the Twenty-fifth Division on which he had served as wardroom steward under Rear Admiral Morison's command, and went to the ceremony. Admiral Morison was equally thrilled to meet his former subordinate and they reminiscenced for several minutes. The rear admiral gave the principal address at the function.
1
2

The dedication of the Christopher Columbus Monument was a historical event. Columbus was praised for his discovery of the islands without the use of technology. Hundreds gathered to witness the unveiling.

US historian at monument dedication

‘All we value, direct result of Columbus’ discoveries’

The flying of the flags of Spain, Italy, West England, America and the Holy See symbolised the unity of nations at Seville, St Ann’s Bay, on Friday afternoon last when the Christopher Columbus Monument was dedicated before a distinguished gathering.

Large crowds gathered around the monument as the Jamaica Military Band played lively Spanish and English tunes. Mingling with the audience were colourful robes of the clergy, and nuns in quieter robes took their places beside women in the height of fashion.

In silence, the people stood while the raising of the flag ceremony took place, followed by the solemn blessing of the monument. The addresses were interspersed with the singing of the choir, and the ceremony was conducted with great dignity.

The Rev Neil H. Donahue, SJ, greeted guests arriving for the ceremony. The governor, Sir Kenneth Blackburne, and Lady Blackburne were accompanied by Admiral and Mrs Frank Fenno and Captain R. Green; acting ADC Admiral Fenno had flown in from the United States Navy Base at Guantanamo, Cuba, specially for the ceremony in order to present the United States flag to the Columbus Monument Committee.

His Lordship the Bishop of Kingston, the Most Rev John J. McEleney, SJ, DD, and attendant clergy greeted the governor’s party and HE the Most Rev Domenico Enrici, DD, papal delegate and his secretary, Monsignor Giovanni Ceirano, who had also specially arrived for the ceremony.

The Hon Dr Ivan Lloyd, minister of home affairs, was chairman for the ceremony, and the chief minister, the Hon N.W. Manley, addressed the audience, with the Hon Luke Hart, Supreme Knight of Columbus, was the guest speaker. Delivering the main address was Rear Admiral S.E. Morison, official historian of the United States Navy.

The ceremony of raising the flags started when the governor, Sir Kenneth Blackburne, walked with the attendant police to raise the Union Jack, while the Jamaica Military Band, under the direction of Band Staff Sgt Major Eldon Stewart, played the national anthem.

The Hon Mrs Lenworth Jacobs raised the flag of the West Indies Federation. Admiral Fenno then presented the United States flag in a wooden casket to Mr Ringwall, who raised Old Glory to the strains of the American national anthem.

Mr David Sabio, consul for Spain, and Mr Ray Bentley, vice-consul for Italy, then raised their flags while the national anthems of those countries were played. His Excellency the Most Rev Domenico Enrici raised the flag of the Holy See with attendant priests at his side.

The monument was blessed by the Most Rev John J. McEleney. Dr Lloyd opened the addresses by extending a welcome to the people gathered “in this old and historic town”. He said the purpose of their gathering was to dedicate the monument erected in honour of Columbus, at the site of the first Spanish capital of the island, Seville.

The governor said he first wished to pay tribute to those who had made it possible for the memorial to be erected. He felt special praise was due to the Columbus Monument Committee under the chairmanship of “that very distinguished Jamaican, the Hon Sir Aldington Curphey”.

Sir Kenneth regretted that Sir Aldington was still in England and unable to be present. He also extended his congratulations to the Rev Neil Donahue, SJ, who had worked untiringly to see the project of the monument completed.

Sir Kenneth spoke of the raising of flags, indicating the flags of the Old World and the new, and the years that had passed to bring the two worlds into happy fellowship. Today the people of the world were looking into outer space,. Columbus had not the help of such scientific data, which made his voyage across the unchartered seas more heroic.

The chief minister commended to the audience the book Admiral Morison had written on the man whose monument had just been dedicated. Speaking of the discovery of Jamaica, at a time when spirits were low in the hearts of men aboard Columbus’ fleet, Mr Manley said it was the dawn of a new history.

Manley said he knew the Jamaica Historical Society, with the assistance of the Institute of Jamaica, was planning to erect a museum near the monument which would keep relics of early Indian life and Spanish exhibits of the 16th century.

The Hon Luke Hart spoke of the formation of the movement 75 years ago, and how it had now spread throughout American territories to embrace over 1,000,000 members. Their objective  was to live in the principles of the man whose name they bore, said Mr Hart. They strived to uphold dignity, democracy, and Christianity, and to do what good they could for their country and its people.

Men were now striving to reach the moon, and in some cases, they sought to reach it for reasons of gaining power, so that they might rule the world and their fellow men.

Columbus had set out to discover new lands with an entirely different concept. He had not sought power, but was inspired by the desire to bring to the Christian Church more lands in which to spread their gospel.

“He brought the good news of Jesus Christ,” said Mr Hart, “and five centuries and more hence, men will still gather to honour him.”

The Trinity Cathedral Boys’ Choir, under the direction of Rev James Healy, SJ, sang the hymn Salve Regina, the same hymn sung by the men on Columbus' ships as they found Jamaica.

Admiral Morison said how fitting it was to erect a monument to Columbus on that particular spot in Seville, for it was here that the discoverer of Jamaica had spent one year.

There was no doubt about the location, and historians had realised St Ann’s Bay was ideal for the purpose of Columbus.

Admiral Morison said he could not understand why Spanish sailors were so helpless in providing food and other comforts for themselves. Shipwrecked sailors of other nationalities had built themselves boats from native woods, but the Spaniards had seemed completely helpless in these respects.

Yet there was a dark side, for no explanation could evade and no apology palliate the cruelty involved in the Spanish conquest, said the Admiral. For this, too, Columbus must bear his share of the blame. “The white man has indeed much to answer for in his conquest of the New World. But, I maintain, the good that he performed so far outweighed the evil that he wrought as to make us justify proud of his achievements, he added.

The spread of the English-speaking peoples across North America, south of the Rio Grande, and into the islands of the West Indies came after Columbus. “The Indies came after Columbus. The English brought their ideals and practice of liberty under law, the greatest boon of mankind since Christianity; and they also brought their own interpretations of Christianity, which many of the later corners have embraced,” said Admiral Morison.

Concluding, he said, “All that we value in modern life, liberty under law, representative government, democracy, freedom of religion, freedom to choose our own careers or occupations."

The papal delegate, the Most Rev Domenico Enrici, delivered the final blessing. The plaque on the stone monument, translated, reads, “Jamaica extols Christopher Columbus, Citizen of Genoa, for unveiling the mystery of the harmony of human brotherhood.

“Mother Geona remembers in great humility her illustrious son who in knowing courage extended the horizons of true conquest in order to unite all peoples in the wonderful ocean in all mankind. The city of Genoa, 12th October, 1958.”

This was presented to the people of Jamaica by the mayor and citizens of Genoa. Italy, on the occasion of the dedication.