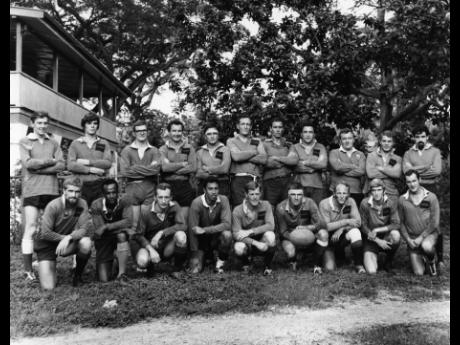 The Jamaican rugby team fought to the end to top the competition. Mike Gill’s penalty against Trinidad opened the door to victory for the Jamaicans and they did not look back.

IN a keen tussle yesterday afternoon at Caymanas, Jamaica pipped Trinidad 9-6 to become rugby champions of the Caribbean for the first time. Earlier, Bahamas made certain of taking second birth as they thrashed Barbados 25-0.

Jamaica finished their scheduled four matches with seven points, while the Bahamas ended with six points, losing only to Jamaica. Guyana held Jamaica to a pointless draw in the opener.

Knowing that they still had a chance of getting a hold of the Correia Cup, Barbados tried desperately in the opening minutes to settle down against The Bahamas. They went into the lead and never looked back. It was a drop kick in the third of the championships by captain John Lively.

Shortly after, Bill Campbell made a try and the first half had ended with newcomers Bahamas leading 6-0.

Campbell sent a good pass to Peter Sergeant, who made no mistake by touching down for three more points.

Lively made the conversion and it was 11-0. Peter Townsend sprinted home for a touchdown and when Lively scored the conversion, the score was 16-0.

A penalty by Lively and Barbados found themselves trailing 19-0 and all set to become the biggest losers of the Championships. This was to be as Campbell kicked ahead and Sergeant touched down in the corner 22-0.

A pass from a scrum and Townsend made it a quarter century.

With their reign as Caribbean rugby champions ended, Trinidad still made a fight of it.

But fight as they could, they were still not able to pick up a win in the tournament, and in fact, they finished at the bottom of the tables with only a draw to their credit.

Bubbling with confidence, Jamaica drew first blood as they went into a three-point lead, thanks to Mike Gill’s penalty. It was another penalty that sent Jamaica further ahead.

For Trinidad, it was now or never. They were hard into the tackles, first out of the scrums and line-outs, but Jamaica never relaxed. However, Trinidad cut down the lead with a Charlie Bailey penalty, and it was 6-3 at the interval.

Roderick Tang Yew levelled for the Trinidadians early in the second half with a try. But then Jamaica’s captain George Wyman capped it all with a touchdown in the corner. The conversion was wasted.

Today, 16 teams made up of the six league teams in Jamaica and two teams from each of the competing countries will have a seven-aside scramble for a trophy donated by Desnoes and Geddes starting at midday. Matches will be of 15-minute duration.