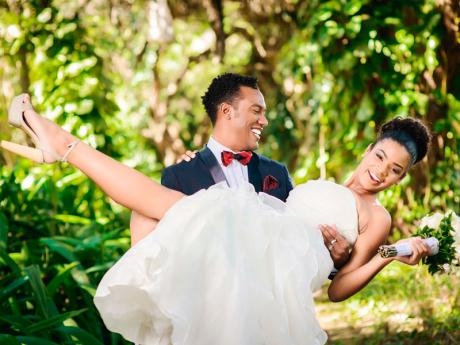 There is nothing more magical than living out your dream with the one you love in holy matrimony. But for most, the day is not complete without some long-lived traditions.

Now, for every honoured nuptial tradition, there is a deep and often dark superstition lurking beneath the surface. So Flair has decided to take you on a little wedding history lesson. Let's unfold the startling truth behind nine of the popular marriage customs practised.

This familiar rhyme is usually executed on the wedding day. The bride is generally to wear one of each. Something old signifies the bride's past, preferably from the family, something new gives way to a fresh beginning, something borrowed an item loaned from someone already happily married with hopes that their joy will somehow rub off on the new couple. Something blue speaks to the colour which means fidelity and love. The saying dates back to a day where six pence existed, and read, "Some old, something new, something borrowed blue and a silver six pence in her shoe" the six pence signified good luck and fortune.

2. The groom avoiding seeing the bride before the ceremony

This tradition stems from arranged marriages. They believed that if the couple saw each other before the ceremony, they will not want to go through with the wedding. Today, the tradition continues with the groom being kept out of the loop when it comes to knowing what the bride will look like on her big day or actually seeing her in her wedding dress before she walks down the aisle. It is argued that bad luck will haunt the marriage if this happens.

3. The throwing of the bouquet and the catching of the garter

These entertaining and sometimes dangerous activities, which signify pending nuptials for the person who catches either has a shady significance. It is said that in medieval times, guests would rip the clothes from the bride's body as it was seen as luck to take as a parting gift. In order to preserve the brides' dream dress, the bride would distract those present by throwing her bouquet as a way to escape from the crowd. Once they got to their 'love room', the groom would toss the bride's garter, which would be his way of saying he is about to consummate his marriage.

4. Carrying the bride over the threshold

The story goes that brides were not allowed to show enthusiasm for losing her virginity, and being carried over the threshold would tone down her anxiety. It also has sinister connotations, since it was believed that the bride, being the woman, would be vulnerable and bring evil spirits into their home through the soles of her feet, so to avoid this, she was carried by her groom over the threshold. Today, this is seen as a romantic gesture.

It is said that wearing a ring on your wedding finger before you get married, reduces your chances of getting married. The fourth finger on the left hand is chosen as it is believed that that finger contains a vein that leads directly to the heart.

7. Wearing of the veil

The tradition of wearing the veil originated in Rome, where the bride wore the veil down the aisle as a mask from evil spirits who were not pleased with her love and happiness. The veil symbolised purity, chastity and modesty. It was also used during arranged marriages and would only be removed after the bride and groom had been wed.

8. Saving the top tier of the wedding cake

Many newlyweds have kept this tradition as a way of looking forward to their first anniversary. But the history of saving the top tier of the wedding cake was in preparation of the couple's first child and they would cut it at the baby's christening a year later. You do the math.

9. The right date and white colour

We often get married on a date which is most convenient to the couple and, of course, the guests, usually on the weekend, Saturday to be specific. But ancient times brought tales of bad luck if you were not wed on the lucky day. The English tradition saw specific months and days to marry, and those who wanted happy marriage choose their wedding day carefully.

Wednesday best of all,

Saturday for no luck at all.

The same rule was applied to the colour of wedding day:

Married in white, you have chosen right,

Married in yellow, ashamed of your fellow,

Married in green, ashamed to be seen,

Married in pink, your spirit will sink,

Married in grey, you will go far away,

Married in black, you will wish yourself back

Married in Red, you will wish yourself dead, (except in China, India, Pakistan and Vietnam where red is a traditional colour of good luck)