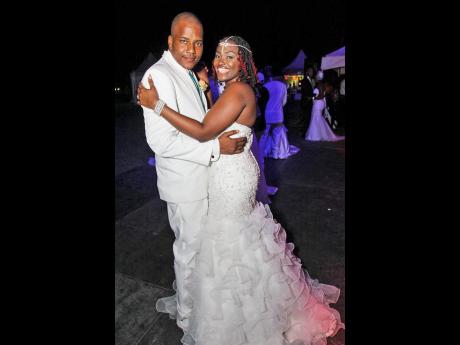 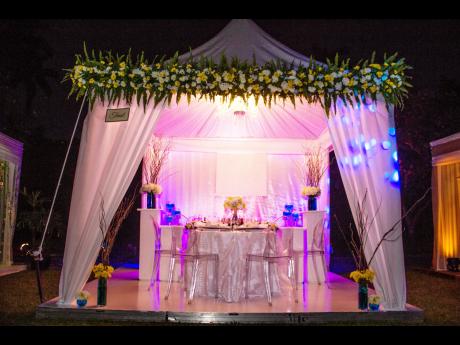 Brian McCalla
One of the beautifully decorated cabanas. 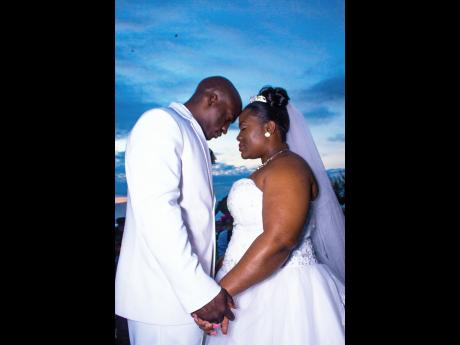 Brian McCalla
A beautiful sunset behind Okeno and wife Denise Haughton while they stand at the altar. 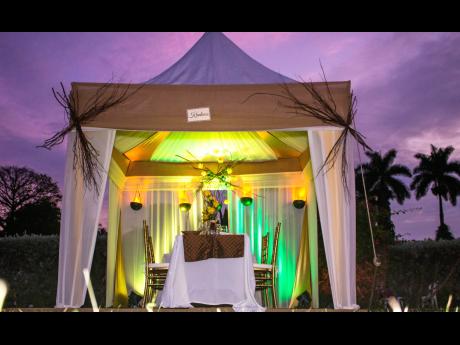 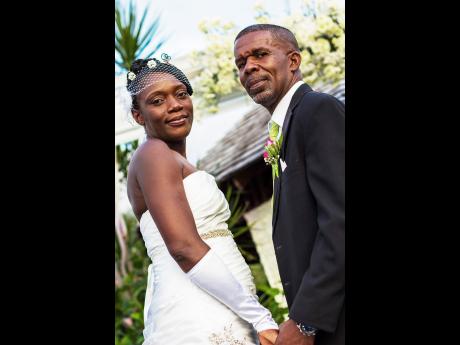 Brian McCalla
Raxon and husband Aston Wright at the altar just before renewing their vows. 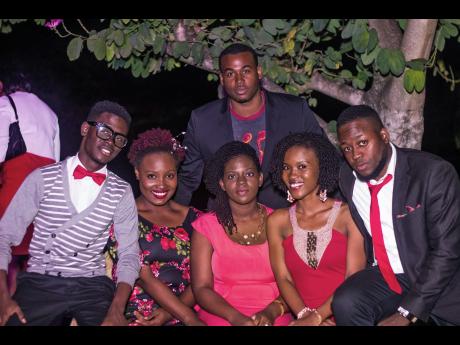 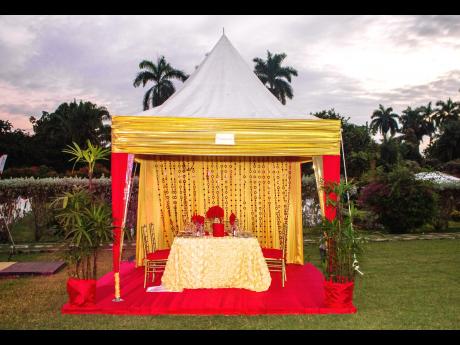 Brian McCalla
Companionship- one of the beautiful cabanas for the couples of 14-14-14. 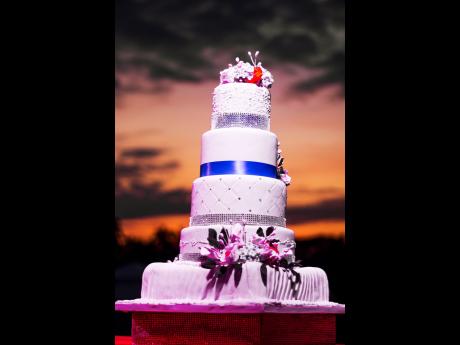 Brian McCalla
One of the delicious cakes for the 14-14-14 Couples. 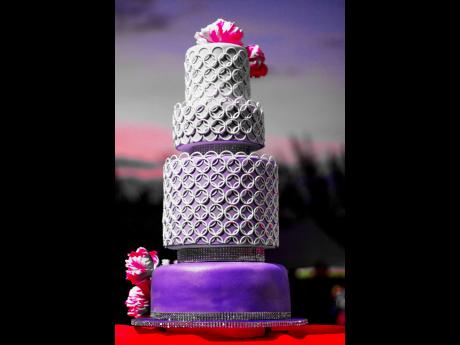 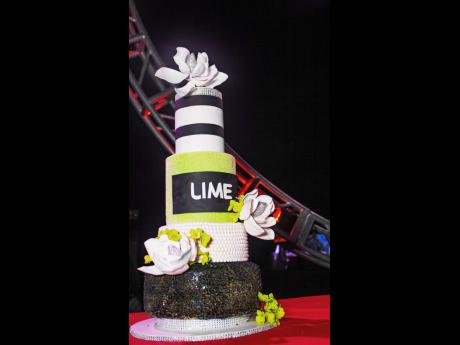 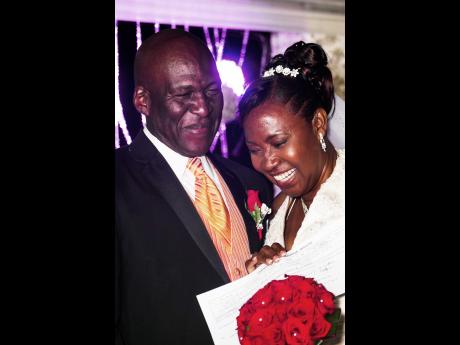 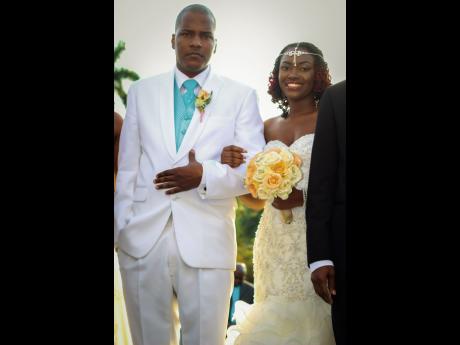 Brian McCalla
Marsha and Adrian Murphy pose as man and wife for the camera. 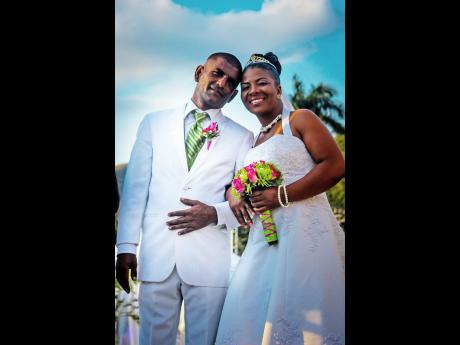 Brian McCalla
Junior Calloo and wife Desrene pause for a photo looking classy in their green, pink and white. 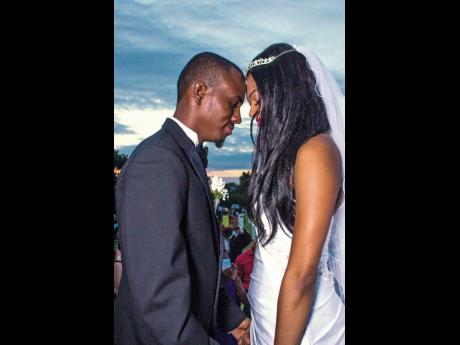 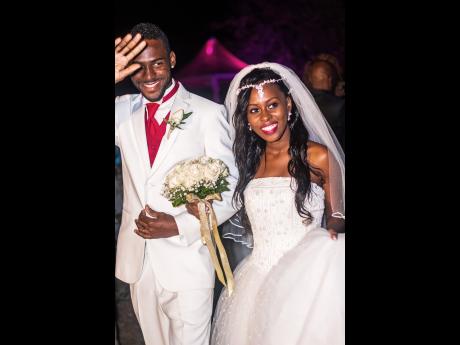 Brian McCalla
Don Hue Brown waves to the audience as he shows off with wife Kadian. 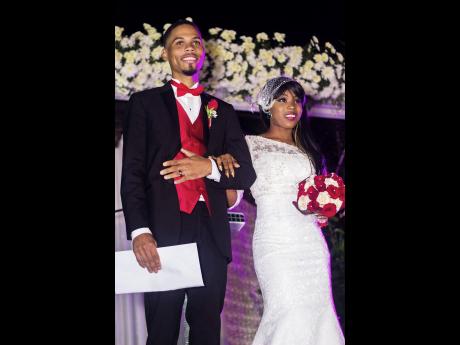 Brian McCalla
Dadrian and wife Tavian Hosang pose for the audience in their red, black and white and marriage certificate in hand. 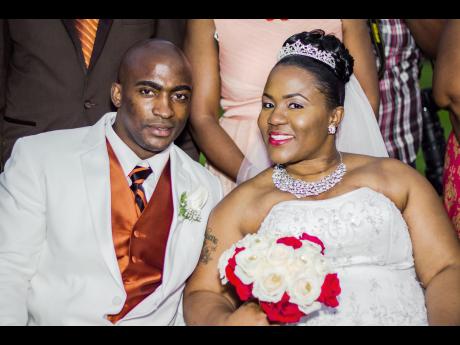 Brian McCalla
Okeno and wife Denise Haughton pose for the camera after they both signed their marriage certificate. 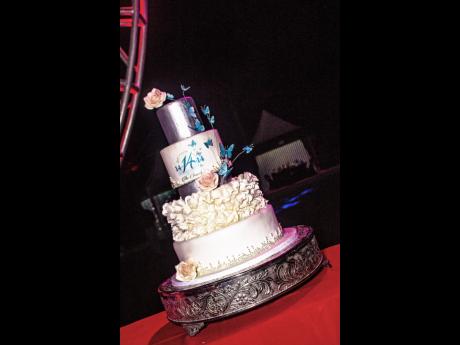 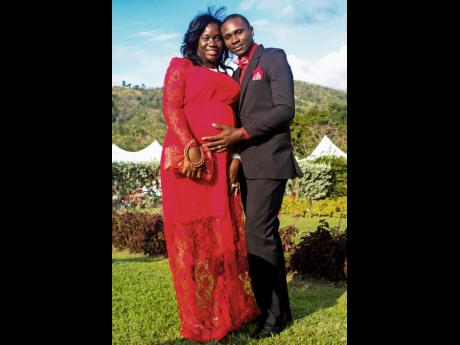 Once upon a time there were 14 couples that were madly in love, three of whom were already married and wanted to relive the bliss of their wedding day, while the others just wanted to seal the deal. They were from the 14 parishes on the beautiful island of Jamaica, and MSW Events gave these couples the opportunity to have their fairytale moment on the most romantic day of the year - Valentine's Day, February 14.

It looked like a dream come true with white chairs spread across the luscious lawns of Hope Gardens surrounded by bougainvilleas, and the altar looked like a little white hut decorated with the flower that represents pure love and good luck - white carnation.

This year's couples were allowed to invite family members outside of the four persons within their private cabanas to share in the joyous occasion. So the garden was filled with family members of the 14 couples in full support.

After a two-hour delay it was time to get the mass wedding started. Cheers rang out at different sections of the crowd as the grooms came out one by one before their loves came down the aisle, like angels floating down the walkway.

That they did. Every bride looked unique in their dress that highlighted their style and personality. From halter backs to sweetheart necks, everyone looked like a princess about to meet her very own prince charming. The sunset behind them enhanced their glow, it was like the sun was at a stand still just giving them enough time to say their vows.

No couple outshone the other as the brides looked into their grooms eyes and promised to be his. The men shouted out their 'I do's' as their blushing brides smiled.

When it came to signing the marriage certificate, the couples came down together instead of individually and all signed along with their respective witnesses. Guests were thoroughly entertained by the musical showcase of the band URIM 7. They sang beautifully to set the atmosphere like a beautiful soundtrack to a movie.

Each couple got their moment to shine, as they were singled out to seal their union with a kiss. It was the end to the first part of what would be the beginning of their lives. Brides and grooms went away to take a few pictures before the official reception.

The reception area was just next door. Couples were welcomed with cocktail drinks and hors d'oeuvres to refresh themselves after the ceremony.

The beautifully decorated venue was stunning - with a mixture of vivacious colours and creative designs, a touch of nature, coupled with exotic lighting, made each of the 14 cabanas stand out in their own way. This allowed the reception to be intimate and personalised for the couple rather than one collective event.

Each cabana was designed based on the different personalities and colour-scheme of each couple. Some preferred an old fashion theme with an antique look and dimmed lights, while others preferred the bright chandeliers and classy decorations to complement their unique taste.

The beautifully decorated cabanas were - elegantly done by Helen G Events Planning and Design, MC Decor Rental and Supplies, DEC Events, Jacqui Tyson, Sharon Saint T. Bair Event Designer and Consultant, Petals and Promises, New Levels Decor - were spread around in a semi circle, with the stage in the centre of the garden. Entertainment was provided by DJ Sanjay, who kept the couples and guests entertained with classic love songs.

On centrestage were seven cakes that the couples paired up to cut. These sweet treats were delightfully done by Cake Couture Ja, Selena Wong, Cake by Robert, Cakes by Latoya and J Smith Cakes and Decor.

Top of the line chefs and cooks went all out to provide scrumptious meals for each cabana they catered for - these included Jacqui Tyson who had a delicious fillet of snapper in bourbon on her menu, Ribbiz who included a sesame chicken and surf and turf kebab on theirs, and Eskay Caterers who had a fine tropical smoked chicken as a part of their main course.

Leading up to this exciting day, sponsors LIME, ran a series of challenges to see how much the couples knew about each other. During the reception, winners Marsha and Adrian Murphy who scored the highest in all categories were presented with their prize of a honeymoon - three days and two nights at the Secrets Resort in Montego Bay.

The couples enjoyed the rest of the night under the stars as man and wife.