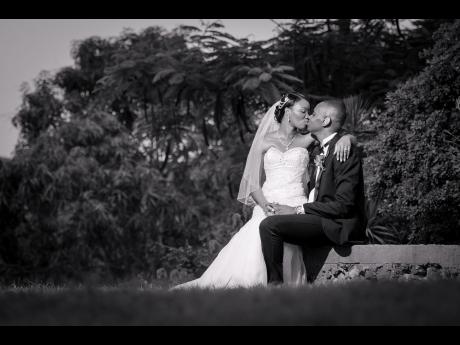 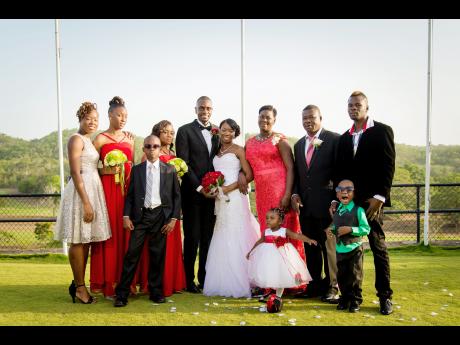 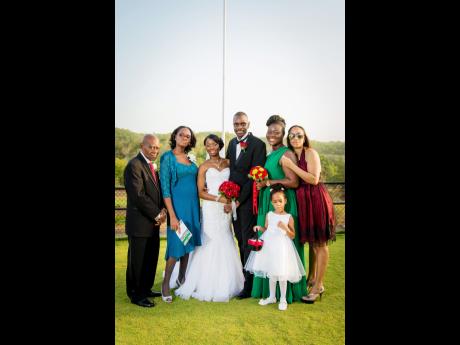 Contributed
The newlyweds also had a photo-op with the groom's family. From left: his father Cecil, mother Hermine, sisters Khadine Green and Maxine Creary-Lyon and niece Billie Lyon. 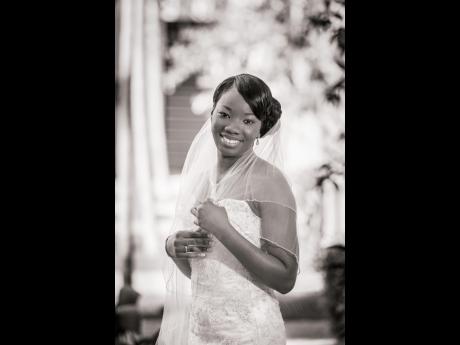 Contributed
The bride exuding beauty, poise, confidence and joy in black and white. 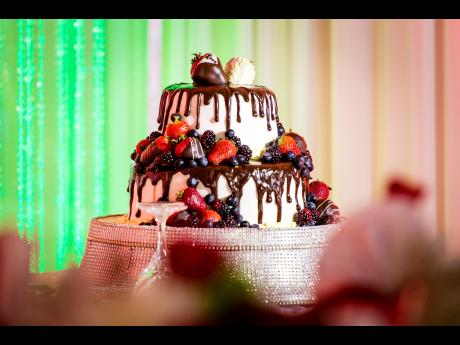 Contributed
Green Wedding The groom's friend Chantal Edwards who came all the way from Canada just for the event, made the couple's amazing cake. Since they met in 2009, she has been asking, when will she be making his wedding cake, and she finally got the chance. Marcella fell inlove with this masterpiece on stockhousgroup .com, and Chantal made her dream come true. 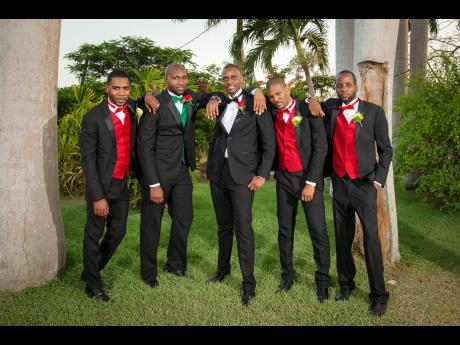 Contributed
The man of the hour was also surrounded by a supportive brotherhood adorned in scarlet and green. From left: Omar Osbourne, Barrington Fearon, groom Nicolai Green, Tan-Hugh Chatrie and Mark Scott 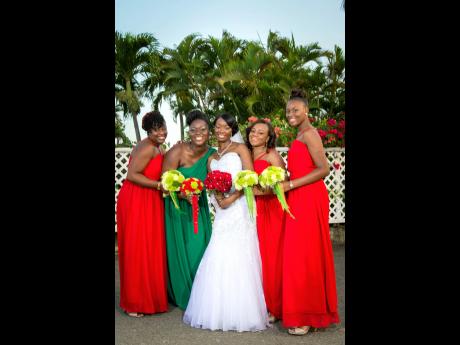 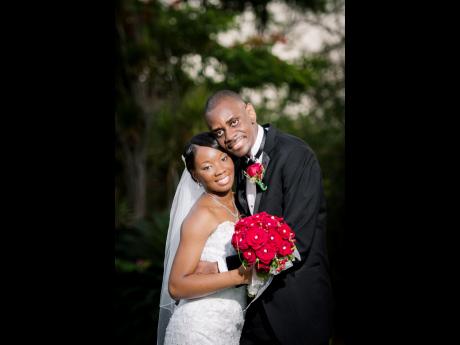 Through hard work, dedication, commitment and love, Marcella Scarlett took that blissful flight to nuptial paradise with the love of her life - Nicolai Green.

The two met at Sigma Run in February 2012 through a mutual associate, and both found each other interesting. Even before being formally introduced to Marcella, he thought that she was "impressive". Marcella thought he was cool and was definitely easy to talk to after having a conversation, but she was not intrigued enough to pursue it any further.

But, as the days went by, their conversations increased. According to Marcella, "I looked forward to seeing him and hearing from him more often. He started to drop hints about his intentions and I waited with bated breath for him to say something outright. At his first attempt, of course, I gave the "I will think about it" response, but by the following week, he had me too smitten to continue playing hard to get." Nicolai confirmed this, stating that it took several phone calls and trips to her favourite dessert place for them to reach the relationship airstrip.

They debuted as a couple exactly one month after they met.

It didn't take much time for Nicolai to discover that Marcella was the woman for him, "We took a brief break in December of 2012 which made me realise I can't be without her; she was really a good catch." Marcella confessed that by June of 2012 she was sure she wanted him to stick around for the long haul, but in December of 2013, she was 100 per cent positive that "he is the one I wanted to say 'til death do us part to. That Christmas I had a family emergency and he was there for me. He saw me at my lowest and he held my hand and helped me to get through that very difficult period," she said.

Almost a year later, Nicolai asked Marcella to be his wife.

The proposal took place on November 14, 2014 at Brick Oven over lunch. Nicolai explained, "Lunch became the option because I swore she was catching on and expected it over dinner the following evening. The ring selection, he said, was made a month in advance, "I wanted something nice but subtle and suitable for her petite built," he asserted.

Nicolai baked up his proposal, starting plans from the start of the week.

Marcella gave The Flair the details of how the event unfolded. "Early in the week, he gave me a box of chocolate and begged me to exercise discipline and not finish it all at once. I agreed to save the last chocolate for a planned lunch date later in the week." She continued, "After the meal we shared the chocolate and I was about to throw away the box when I bumped into a card at the bottom of the box. By the time I looked up he was on his knees and those big sparkly eyes staring at me."

On February 19, 2012 you walked into my life. Little did either of us know what the future had in store. We got to know each other as the days went by and on March 19 of that same year, we decided to take our friendship to the next level. We can both agree, we've had good times as well as bad, but, loving you has made the bad times all worth it. Not having you in my life is not an option and I would like for you to be my wife. Will you marry me?

Of course she said yes.

The couple created a matrimonial theme by fusing their names, Scarlett and Green, making red and green their official wedding colours. Carla Rebhan of Ultimate Events was hired to be the chief organiser for the event, and Marcella and Nicolai did the invitations, the programs and organising the cocktail.

On June 28, 2015, Nicolai Green and Marcella Scarlett were joined as husband and wife, in the presence of God, witnessed by supportive family members and close friends. The wedding ceremony, was held at the beautiful Caymanas Golf and Country Club at sunset, and came alive as the beautiful bride and the handsome groom declared their unconditional love.

The reception followed at the same venue, during which the bride and groom shared their first dance as husband and wife to a live rendition of Thinking Out Loud, originally song by Ed Sheeran, but performed by the Master of Ceremonies, AndrÈ Williams, saxophonist Wayne Foster ,and the groom.