I thought dances were for dancing 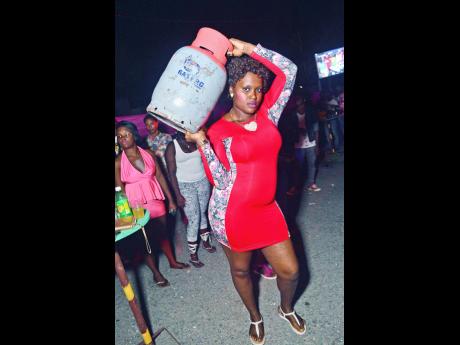 Anthony Minott
This woman poses with a gas cylinder she won at a party. The photo eventually sparked a series of other similar photos.

Now I've never really attended a dance. And when I say dance, I mean the good old-fashioned event that Jamaicans love.

But the more I think about it, I'm really beginning to think whether these people actually would want me there. Based on what I've heard, I don't think so. You see the problem is, I thought people went to dances to, well, dance. But, apparently, these days, they do everything except dance. First I heard about people carrying gas cylinders to dances. Whether the cylinders are filled is another matter. Now, again, I thought you went to a dance to move to music. Not sure why I would need to get exercise in any other form or fashion. But since I have no intention of carrying anything other than some cash and my keys, that's strike one for modern-day dances.

Then I saw where women were gyrating while holding open flames, whether from a lighter or some other fire-producing object, next to their private parts. Yes, that part down there. Now I understand that some women consider that particular body part to be quite precious. Some will tell you straight up that's how they've paid for all their nice clothes etc. So why you would want to run the risk of burning it? I'm not sure.

As one friend pointed out, if you have open flames around the aforementioned gas cylinders, that could spell disaster. Our fire fighters have enough calls to respond to, why would we want to give them more work? Then again, the accidental arsonist might be pleased that he helped to 'bun dung di place'. Of course, such a trend might not last that long because we only have so many entertainment venues to go around.

So just about when I thought I had seen everything (and by now I should now that you will never, ever see everything) I heard of another craze where women were washing their hair in dances. Ahm, what? OK, I guess I should be grateful that at least they're not using something flammable. But these dances are held very late at night/early in the morning. Surely having a wet head, outdoors, cannot be a good idea. People can get pneumonia from doing less. Plus with the water crisis that we have right now, that's just a waste of resources.

But this madness in dances has been going on for some time. Remember the trend of the male dancer jumping from a higher level, like a speaker box, and landing on a woman lying on the ground. And this was allegedly fun! Loooong gone are the days when a man and a woman went to a dance and 'rented a tile'. Call me old fashioned, but that's just how a 'dance' should go. Even if all the women are doing is 'backing it up' on the men, that's fine. It's surely more dancing than the previous acrobatics I described.