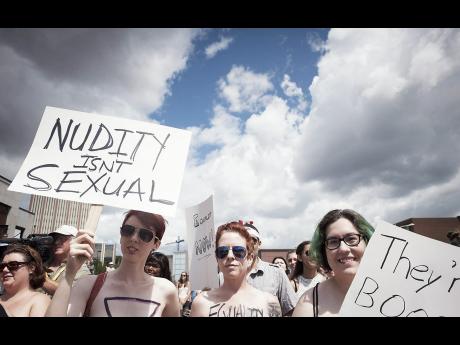 I've always heard of getting to the bottom of things, but some women in Minnesota decided their problem was with the top.

The women went topless in a downtown Minneapolis park to protest the fact that men who do the same thing in public are not prosecuted. The organisers expected about 500 women to shed their tops in unison and solidarity. The organisers also said they wanted women to feel more comfortable with themselves and around other people. I guess women's forums and pep rallies are sooo last year!

Now I agree, to an extent, with the bare-chested belles. If women want to go topless, I'm all for it! OK, I know that's not what they meant by the whole protest, but I'm just saying. If that is one thing they want support on, I am behind them 100 per cent (grins mischievously).

On another point, some men, quite frankly, should not be allowed to go topless in public. You know the ones I'm talking about. Dem belly reach a dem knee, they look like they need a bra, and they got breasts in their back. I'm not saying they should dress like Eskimos, but put on a T-shirt, nuh! Di topless ting? Is not a good look, at all!

Before you go saying I'm one of those guys with chiselled abs and immaculate pectoral muscles, the answer would be a resounding "no!" Nobody is mistaking me for a stud. My gut and wider midsection are actually closer to the slightly obese side than the thin end of the spectrum. So, if anything, I should be defending the men who walk around letting it all hang over. Sorry, fellas, I can't. And I've always been that way. Whenever I played football as a child, if it ever came down to shirts and skins, I always prayed I was on the shirts side.

Two things I didn't agree with. The women's group wanted men to wear bras, etc., to show their support for their move. I thought the point was to eliminate the ghastly sights, not add to it. Also, while I support women's right to equality, not all women should be allowed to go topless, just like their male counterparts. Let's face it, just because they're women doesn't mean we want to see all of them without blouses. I'm all for feeling comfortable in your skin, but there has to be boundaries to what you should be allowed to (not) wear, especially in public. Imagine choosing melons (no pun intended) at the market next to a man or woman with his/her respective melons in full view? Ahm, no thanks. I can hear the voice over the intercom now, "Attention, all shoppers. Close your eyes on aisle four."

You know, I think I'll start a revolution myself. Anybody who the 'ordinary man' doesn't think should be without a full T-shirt, whether man or woman, should get fined. Trust me, a merino just doesn't help everybody. Later.

• Tell me what you think at daviot.kelly@gleanerjm.com.