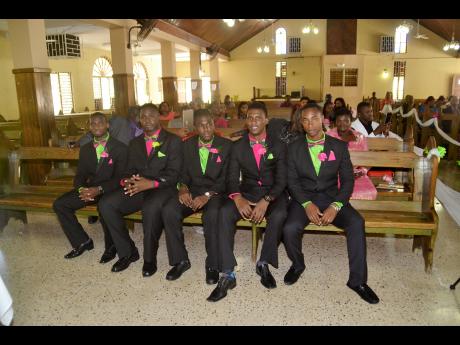 Contributed
The groomsmen representing the wedding's colour scheme so well. 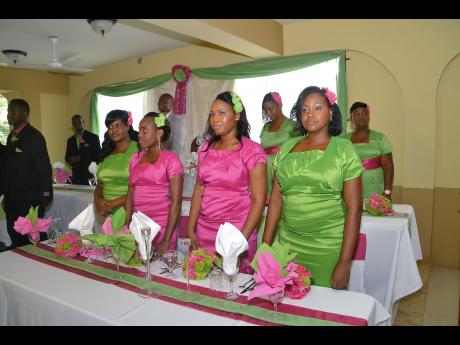 Contributed
The bridesmaind in their colourful ensemble. 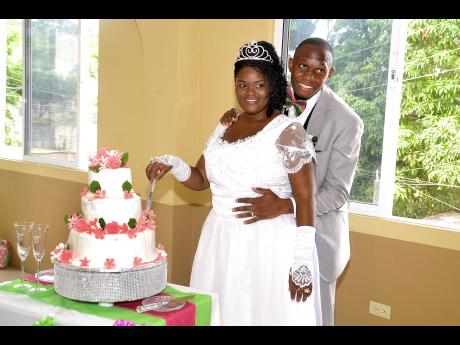 Contributed
The groom, Mark, lovingly embraces his bride, Sasha-Gay, as she cuts the wedding cake. 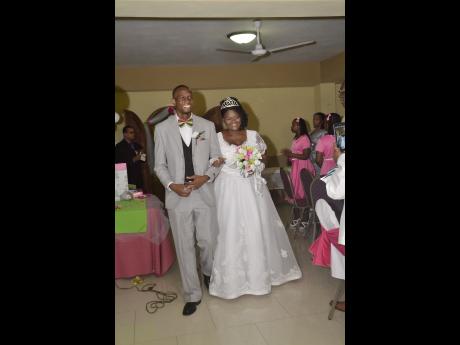 Contributed
Mark and Sasha-Gay walking down the aisle as husband and wife. 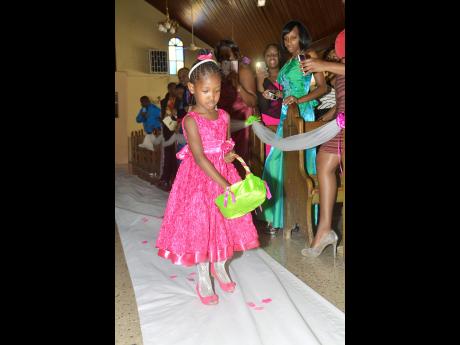 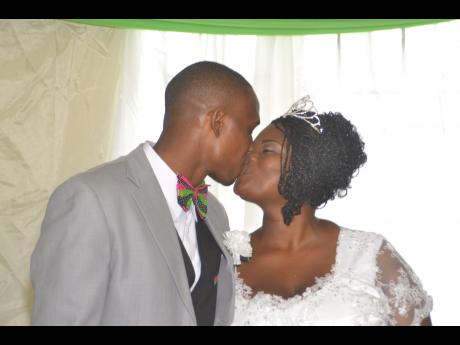 The act of spreading the gospel has brought together Mark Gilling and Sasha-Gay Baker, two persons from the same church, who never exchanged a word prior to January 2014.

In January 2014, Gilling and Baker were among members of The King's Chapel United Pentecostal Church in Montego Bay who were out distributing tracts in the community of Rose Heights. They were spreading the word of God and encouraging residents to attend church. The two interacted for the first time while speaking to a resident, and since that conversation, they haven't stopped.

Sasha-Gay is a teacher at Mark's alma mater, St James High School, and Mark is a vending-sales coordinator at The Gleaner's Western Bureau office. They would spend their evenings together after work before heading home. Sometimes, after distributing tracts, they would spend several hours at the lush Old Hospital Park, conversing while enjoying the beautiful turquoise Caribbean Sea.

"It started as a friendship and grew into a relationship then bloomed gracefully into a marriage," Mark told Flair. "Sasha has a warm personality. She is undeniably charming and effortlessly keeps me smiling. The more I got to know her, the more I knew she was destined to be my wife."

Sasha-Gay cheerfully added: "I liked Mark instantly. He is slim, tall, and handsome with a remarkable personality. I was immensely touched by his dedication towards church, family, and friends. He is always eager to spread the word of God and participate in church-related activities."

In April 2015, after a lovely evening together, Mark asked Sasha-Gay if she would marry him.

"There was no ring at the time, but I smiled and said 'yes!' Our denominational custom requires official marriage proposals to be done in front of a pastor and at least three witnesses." Sasha-Gay explained.

On Teacher's Day, May 6, 2015, Mark officially proposed to Sasha-Gay at church in front of their pastor Frank Kellier, three witnesses, and his mother, Beverley Gilling. His mother was overcome with happiness and openly wept during the proposal.

Under a bright blue sky towering above The King's Chapel United Pentecostal Church on Saturday, August 8, Mark and Saha-Gay were joined in holy matrimony before 100 guests.

The couple's never-ending smiles and gleeful laughter throughout the entire ceremony created a happy aura that spilled over into the reception.

The reception was held at the nearby church hall which was elegantly decorated in rose pink, apple green and white by Jullian Stewart, Doretta Reid, and other family and friends of the couple.

The bride's wedding dress was assembled and designed by one of her new grandmothers Minerva Wilson- who also sewed for four of the six bridesmaids.

The reception concluded with a speech from the couple who thanked God and expressed their heartfelt gratitude to their families, church members, friends, co-workers and well-wishers who supported them and participated in making their wedding and reception a reality. The newlyweds will be spending their honeymoon in the garden parish of St Ann.