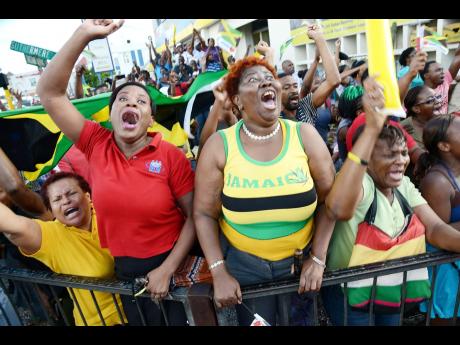 Rudolph Brown
A section of the crowd that gathered in Half-Way Tree, St Andrew, last Saturday morning to watch Jamaicans competing in the men 4x100-metre relay, which saw the country winning a gold medal at the IAAF World Championships in Beijing, China.

Okay, so the 15th IAAF World Championships are over and done, and the euphoria has just about died down.

Throughout the championships, Jamaicans at home and abroad were wearing the national colours and there was arguably more national pride than we got during the actual Emancipation and Independence periods. Even people who didn't know where to find Jamaica on a map were all of a sudden honorary Jamaicans. But now that everything is done, we'll see if the goodly fans have learnt anything about patriotism.

You see, it's too easy to find a combination of black, green or yellow (I know it's gold, but let's be honest, when last did you see our national flag with gold, not yellow?) when the sports teams are doing well. We believe in our athletes and we love picking up medals (especially of the gold variety) anytime we go out on the track. We will tie our heads with replicas of the flag, we will travel miles to watch the action on big screens in town capitals and traffic hubs, and of course, there are the ever-present Dutch pot covers.

Like we did at the recent championships when we earned 12 medals, including seven gold ones, people had nothing but praise for the team. And then you heard the inevitable "I am proud to be Jamaican." Well, that's great, but it would be nice if you showed it more than when we're participating in some kind of sports event. Or if we are cheering on the latest Miss World, Miss Universe, or Scripps National Spelling Bee contestant. But that's how Jamaicans are; even if we've never heard of you five minutes before you appeared on camera, you're one of us now and we salute you incessantly.

If you run last, that's another matter. Remember the woman on TVJ who said Jamaica would get first, second, third and fourth in the women's 400-metre? When asked which athlete would finish where, she couldn't remember the names of the competitors. For me, a real fan who 'loves' the team would know at least one of the names.

Want to show you really love Jamaica? Demand more from your elected representatives. Stop burning tyres in the road when you're protesting. Stop throwing garbage into gullies and rivers. Parents, stop spending your meagre dollar on misplaced priorities. To the politicians, stop promising the people improvements in their constituencies that you know you have no intention of fixing. Police mus' stop bruk people house and shop. Communities must once again start raising the children. Drivers mus' stop break red light and knowingly drive around with defective vehicles. You get my point.

We can't just be proud of Jamaica's athletes/scholars/professionals et al, but try our best to break down the very infrastructure and moral fibre of the place we call home. That just makes no sense. Later.