Leukemia survivor to help other kids with cancer 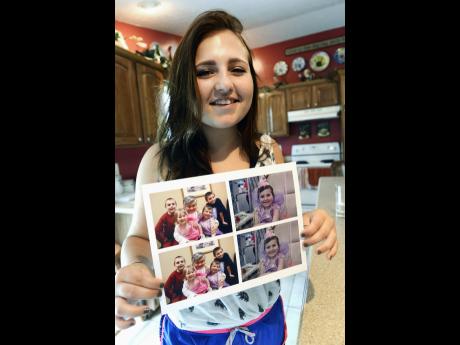 AP
In this July 21, 2015 photo, 16-year-old Ginny Kreckman, a survivor of acute lymphoblastic leukemia, holds a photo at her home in Normal, Illinois, when she was undergoing her treatment at St Jude Children's Research Hospital in Memphis, Tennessee.

Ginny Kreckman, then three and a half, was receiving chemotherapy intravenously at St Jude Children's Research Hospital in Memphis, Tennessee, when an announcement was made that the St Jude Runners were about to take off for Peoria.

Ginny's parents, John and Kristin Kreckman, are runners, so John urged Kristin to take a break to help see the runners off as he remained at Ginny's bedside.

"I stood by the curb, high-fiving all the runners. And I thought, 'God, if you wanted us to run, all you needed to do was ask,'" recalled Kristin, smiling but with tears in her eyes.

"I came back to Ginny's room and told John 'I know what we have to do.'"

What the Kreckmans have done in the 13 years since then is not only love and care for Ginny, who is considered cured of her acute lymphoblastic leukaemia (ALL).

John and Kristin also have participated in St Jude Runs to support the hospital in Memphis, and the Jim and Trudy Maloof St Jude Midwest Affiliate Clinic at Children's Hospital of Illinois, Peoria.

This year, for the first time, the Kreckmans, of Normal, will be joined in the Bloomington-Normal-to-Peoria Run by Ginny. Now 16, she is old enough to participate in a St Jude Run.

"I just want to do it," Ginny said. "I went through it (cancer treatments). I want to help other kids who are going through it.

"I want them to know 'You can do this,'" Ginny continued. "I want to help St Jude in any way I can."

Kristin nodded. "We run for the next family coming through the door. We run to find a cure (for childhood cancers)."

"One of the beautiful things about this whole event is we get a chance to meet some of the patients," said Dennis Cler, co-chairman of Bloomington-Normal-to-Peoria Run. "To see a success story like Virginia's (Ginny's) - she's now healthy and fit and able to join the run - that's what we all want.

"That's why we're doing this," said Cler, who is participating in his 19th Bloomington run. "We want every kid who is sick to get better."

Ginny was three and a half years old in summer 2002 when her right leg began hurting.

John - then a primary care physician in Mendota - didn't waste time. He requested a blood test, followed by tests at Children's Hospital. When they proved suspicious, the Kreckmans headed to St Jude in Memphis.

There, a biopsy confirmed the diagnosis of acute lymphoblastic leukaemia.

"I was in shock," Kristin recalled at the kitchen table of their Normal home last week as she and John fought back tears and as Ginny, Ben and Georgia listened. "We did a lot of praying.

Ginny began receiving chemotherapy. She was an inpatient for a month and that's when her mother first saw the St Jude Runners.

Then, for several months, she was an outpatient receiving chemotherapy but remained in Memphis. After that, she returned home. Most of her subsequent treatments were at the Peoria clinic although she returned to St Jude in Memphis from time to time.

"We had our suitcases packed for three years," Kristin said. "We celebrated Christmas at the hospital, hid Easter eggs and celebrated birthdays. You become creative."

"But I've never broken a bone," Ginny said proudly. She does well in school.

"She seems to be doing just fine," her mother said. "She's a success story."

"That's why we run," Cler said. "And it'll be even better this year with Virginia (Ginny) with us."

"I hope people see that it does get better," Ginny said. "My motivation for doing this is to help others."

The run is just the start of Ginny giving back.