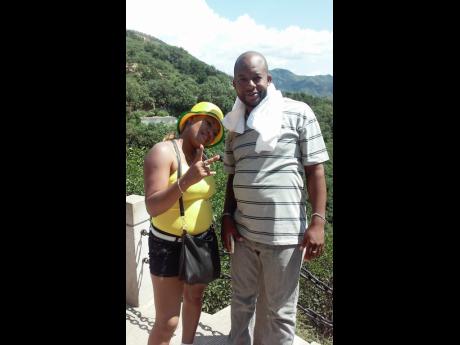 Contributed
The Hamiltons chilling on the Great Wall of China. 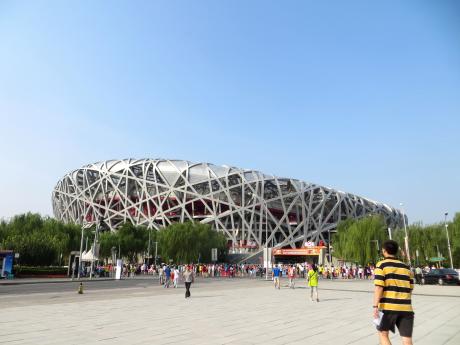 Contributed
Outside view of the Bird's Nest Stadium, Beijing, China. 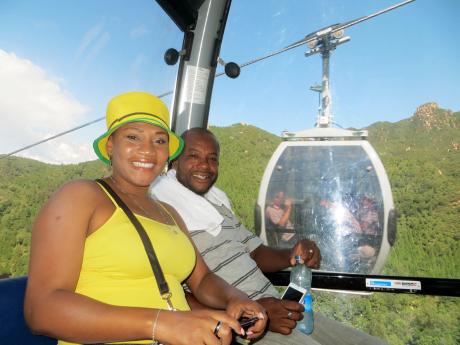 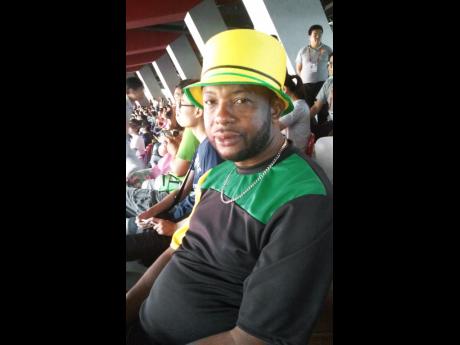 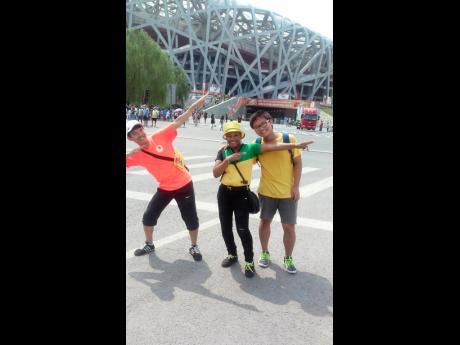 Contributed
Once you're a Jamaican you're 'famous' in China. These two Jamaica fans were caught doing the Usain Bolt 'To the world' pose with Eulanda outside the Bird's Nest Stadium.
1
2
3
4
5

While many gathered in Half-Way Tree, restaurants, or the comfort of their own homes enjoying the recently concluded IAAF Athletics Championship in Beijing, China, Marvin Hamilton and his wife, Eulanda, got to experience the games at the Bird's Nest.

While at one of the Wray & Nephew Contender matches, Eulanda got the call that changed her life. She told Flair that when her phone rang, she answered, "It's the Wray and Nephew Contender" and that gave her the grand prize of an all-expense-paid trip to the games. "When I heard that I won the trip to China, I was so excited, I screamed," Eulanda told Flair.

All it took was the purchase of a 'Wraytastic' package - Schweppes and a flask of white rum - during a match, and then text in the code. Weekly winners would get $10,000 cash prize, but it was on the final night of the competition that the grand prize was selected.

The prize package included round-trip tickets for three days of the IAAF World Championships, flying business class from Kingston to Beijing, for the United States and China. They stayed for five nights in a double-occupancy hotel room where breakfast and dinner were covered. They also got transportation and spending money and a day tour.

Neither of the Hamiltons have ever travelled out of the country before, neither did they have a US visa..

Luckily, they got their first complimentary trip together. And everything was taken care of by the Wray and Nephew team.

As the couple prepared to leave the island, they were told what to expect on their trip, and that, Eulanda said, eliminated their nervousness.

The Hamiltons got first-class treatment on their three connecting flights to China, which they said eliminated a tedious 18-hour travel. "The flight attendants were very friendly. They were like our personal butlers," they disclosed. They couple was excited that they got anything they asked for on the long flight. Anything they requested for breakfast, lunch, dinner, snack, or even dessert - some of which included shrimp, lobster, mashed potatoes, salad, nuts, ice cream, juices, and vino.

On their arrival in Beijing, the couple was taken to the all-inclusive Ramada Parkside Hotel for the duration of their stay. Being away from home, the couple had no choice but to indulge in a variety of Chinese dishes which they revealed they found very interesting. "They did not only serve Chinese, but American food and foods that we were able to identify. They were labelled so we knew what we were eating. Some of which included spring rolls, Chinese tea, Chinese soup, teriyaki chicken," the Hamiltons said.

But the highlight of their trip was their first time inside the Bird's Nest. "What grabbed us the most was how our Jamaican athletes were received by the entire stadium. They stood up to celebrate Usain Bolt, Shelly-Ann Frazer-Pryce, Asafa Powell, and the rest of the team. It was just a wonderful experience. I mean the spirit of Jamaica is very strong in China, they just want to see the Jamaican flag waving and they wanted to take pictures with you. They love the spirit of Jamaica."

There was a lot to see in China and the couple used the opportunity to tour the Great Wall of China, the Pearl Market and the Summer Set Palace and walked on the Long Hall.

Regarding China's unpredictable weather and how quickly the temperature changes, the Hamiltons said they were amazed. "It can be very hot and by the time you go in a store and come outside, you wonder if there is a storm coming. I mean the place get smog so fast, it even rained as well, then the place just get cold ever so quickly," they said.

Eulanda noted that this trip to China impacted their relationship in a positive way, "spending such wonderful times together on an all-inclusive trip - it's a wonderful feeling knowing that my husband is always working and he put off work for this trip. I mean we both got to travel together, which we have always talked about," Eulanda said with a smile.