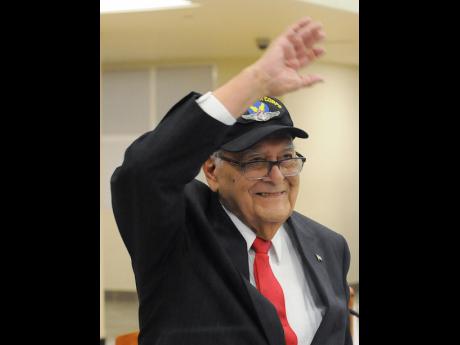 Frank Branton Sr has fulfilled his 60-year quest for his high-school diploma.

It came to fruition on Tuesday during the Florence High School Veterans' Day programme when Branton was awarded his 1953 Coffee High School diploma.

The replica of the diploma of that time period was approved by the State Department of Education as a means of honouring a US veteran.

To Branton, it meant something much different.

"At 80 years old, I look back on my life and I've been everywhere and seen and done everything I wanted to," he said, upon receiving his diploma before a student-filled auditorium. "This fills the only hole I had left in my life, and it tickles me to death."

Branton recalled his senior year at Coffee High School, saying he was on target to graduate. An argument with his physics teacher led to incomplete grades and a failing grade for the class.

"I got a 67 in that class, despite making an 89 on my physics final, and it kept me from graduating - well, that and my smart mouth," he said.

Branton and some friends joined the Navy Reserves at 17. He took the college entrance exam and earned a business degree. His Air Force career, beginning in 1955, lasted until 1966, at which time he joined the Army.

Overseas tours in Korea and Vietnam lasted until 1969. He retired from the Army in 1977 and began his civilian career as a computer systems analyst. He has lived in Pensacola, Florida, since 1980.

"There's nothing I didn't want to do that I missed out on," he said. "The lack of this diploma just haunted me, and I knew I had to pursue it."

She said the State Department of Education was also eager to help Branton, and issued the diploma. The high school's graphic design instructor, Randy Bruce, designed the diploma in 1953 Coffee High School fashion.

Chase said it was an honour to facilitate the awarding of such an important documentation to a true American hero. She urged students to take notice.

Blake and Braiden Jackson, sisters in the 10th and 11th grades, respectively, said the programme was touching and memorable.

"Knowing how many people gave their lives for our freedom, and are still doing it today, it really makes you stop and think how fortunate we are to have those willing to sacrifice like that," Braiden Jackson said.