Let's get this over with 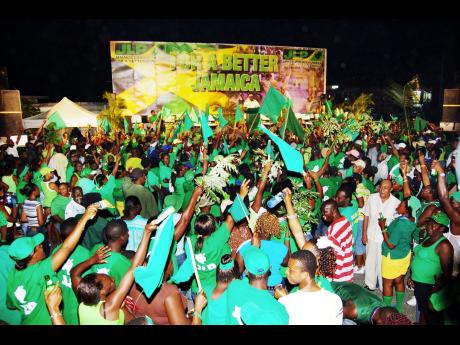 File
A section of the crowd at Independence Park in Savanna-la-mar, Westmoreland, for a Jamaioca Labour Party rally. 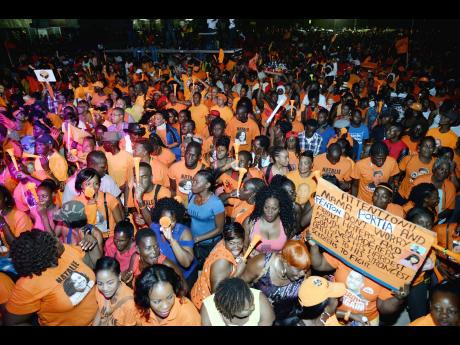 Jermaine Barnaby
A section of the crowd at a People's National Party rally in Portmore, St Catherine last Sunday.
1
2

I try not to write about politricks, er, I mean politics. But considering that everyday I keep hearing about impending elections, I figure, what the hell?

(I should put the disclaimer that if by any chance the election date was called, it would have been after this column went to press). Whenever election time (aka the silly season) comes around, there are a few things I look forward to, and a whole heap a tings I don't.

First, I don't like the back and forth at the rallies. They can be humorous, but for the most part, they're just tedious. Whoever is in opposition curses the ruling party for not doing enough. The ruling party in turn tells everybody what a great job they did. Yawn.

Another thing I can do without is persons attributing everything to politics. You could have had a protest planned for weeks about a particular grievance that has been a pain for years. But anyhow you do the placard thing during an election period, you're playing politics. And even the protesters are aware of the stigma, stopping from chanting 'we want justice' to make it known that 'this is not about politics'. Sigh.

As for the colour scheme, in years gone by, you couldn't wear certain colours. People would be in your face, figuratively and literally. They've kind of eased away from that, but it's still possible that you will see orange or green flags hanging on your light post.

Only ever seen one councillor campaigning. Other than that, the prospective candidates in both local and general elections in my constituency don't come knocking. That part, I'm glad about. I'm home mostly on weekends, and I don't like anybody interrupting my sport watching. One thing I do like are the party campaign songs. I'm sure I would have heard a number of songs over the years, but somehow only the last two popular ones immediately come to mind. In 2007, the Jamaica Labour Party had Me and Mi Neighbour (Voting for Labour). The following election (2011) the People's National Party had Tun up di Ting. The election-related songs I've heard aren't working for me. No disrespect.

Truth is, when election time comes around, some people get nervous. And that's because over the years, some daft things have taken place during, and perhaps because of, the season. I think the only person who really has any fun is the bar owner who provides all the rum to the parties during rallies. That is, if he gets paid on time. And just hope the rally isn't close to where you lay your head as it will be a long afternoon/evening. By the way, can we ask the two major parties to finally decide who is running and where, please? You cannot be confusing the electorate by choosing new candidates every five minutes. Mek up unnu mind!

So, Madam Prime Minister, do us a favour? Tell us the date so we can just get it over with. Love and thanks. Later.

- Tell me when you think it is at daviot.kelly@gleanerjm.com.