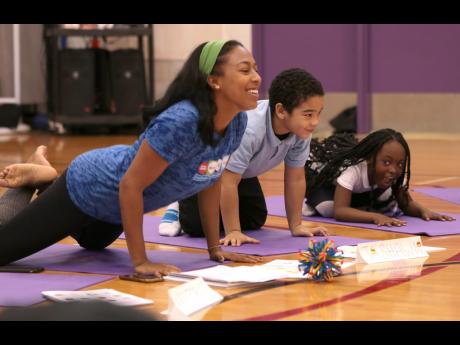 Associated Press
Kerrie Trahan, a Work It Out programme and volunteer coordinator, leads the third-graders at the Charles Wright Academy of Arts and Sciences in Detroit, in a yoga pose during yoga class at the school gymnasium. Left of the instructor is Jashawn Johnson, 8, and Breah Carter,8, both 3rd graders.

When Taurean Camel is feeling mad or worried, he knows exactly what to do - strike a yoga pose.

"I just breathe in and breathe out, slowly," the nine-year-old said, "and all the stress and negativity just comes out of my system."

Taurean is one of 1,200 elementary-school students in Detroit who are bending and twisting on bright purple mats as part of a yoga-based fitness and nutrition programme run by the non-profit Danialle Karmanos' Work It Out.

The programme aims to prevent childhood obesity and increase self-esteem.

"It's had more far-reaching positive effects than we ever could have anticipated," Karmanos said recently after watching students practise at the Charles H. Wright Academy of Arts and Sciences. "We're seeing a significant decrease in bullying behaviour and an increase in educational productivity."

Karmanos, a community activist and wife of Compuware co-founder Peter Karmanos Jr, started Work It Out 10 years ago because she wanted to offer an option to children in low-income areas who might not have access to health programmes.

The 10-week class is in seven Detroit charter schools and eight schools that are part of Detroit Public Schools (DPS). It's especially welcomed in places that have lost or cut gym classes because of budget belt-tightening. Wright, for instance, is the only participating DPS school that has its own physical education programme, said Tom Anderson, CEO of Work It Out. The children there do the yoga during their gym class.

DPS works with various non-profits to bring a patchwork of after-school physical activities such as soccer, golf, football and basketball to some elementary schools, including those without physical education programmes.

"We can't do it alone. We need these partnerships," Edward Tomlin, deputy executive director of elementary and middle-school sports for DPS, told the Detroit Free Press (http://on.freep.com/1LJyXwR ).

At Wright, 23 third-graders positioned their purple yoga mats - provided for free and theirs to keep - in a circle on the gym floor. With a wide smile, energetic instructor Kerrie Trahan led them through a series of poses.

"Does everybody know what's next?" she called out.

"Downward dog!" the children shouted. They positioned their hands and feet on the ground - and then started barking.

Amihr Nelson, 9, said yoga has helped him be a better football player. His favourite pose is the warrior, with arms outstretched, feet spread apart and one knee bent.

"It helps you in sports," he said, "so you can keep your balance and stay focused."