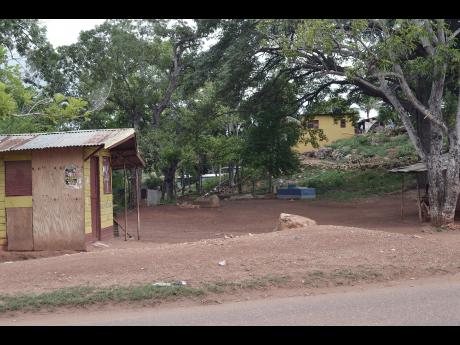 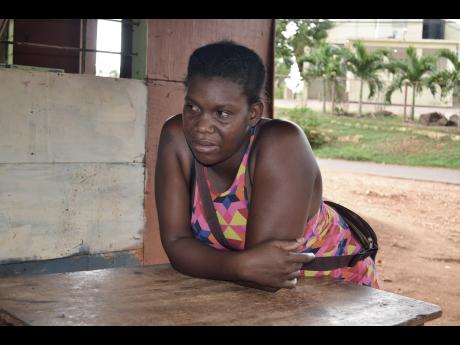 Francis ponders as she reflects on yesteryear. 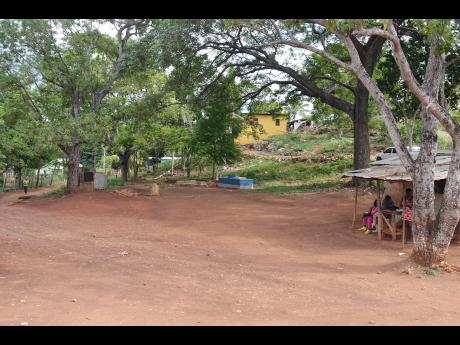 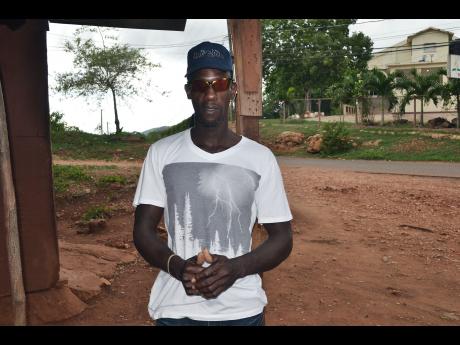 Gordon speaks with Flair infront one of the shops now occupying the burial ground.
1
2
3
4

The loud screams and delightful cheers of children are no more in the big empty burial ground tainted with uniquely designed graves, blackie mango trees, and a huge gungo tree that shades the rich red soil. Surrounded by a tenement yard on the hill called 'top yaad', at the border of the communities of Bullet Tree and Red Ground in Old Harbour, St Catherine, Ms Sally shop and a Seventh-day Adventist church across the road - are neighbours of the famous playground.

The playground now houses two shops - one belonging to Shernnette Bennette and the other to Shereen Haslam-Vincent. Children no longer play there for hours. Modern technology seems to have taken over and the playground has gone silent. But for the children who grew up there, those days hold fond memories.

Haslam shared her experience playing and gambling in the lot, recalling Germaine 'Stamma' Clarke, (a taxi operator in the area who recently passed away), making cricket balls by melting a number of plastic items together. "While the children played cricket, Stamma would be running his trip and stop, hit a six and go back to work. That doesn't happen anymore. Besides people dying. There is no unity with the older ones who are left in the community. There used to be love, nowadays people are all grown and get bad mind," Haslam notes.

Her brother, Oral, also chimes in telling Flair, that he enjoyed playing cricket and could hardly wait for Saturday mornings to go to there and play. "I just love the sport. I am dedicated to it even now, but because of work and everybody parting ways, or dead, I haven't been able to play much. I really wouldn't mind going back to those days, trust mi," he confessed.

Haynes said that he is saddened by the fact that there is no more love and unity in the community. "Nuh luv nuh deh yah no more. Back in the days, when I used to play all these games, it was nice, but the love has died among those who are left," he explained.

Rose-Marie Francis said she liked playing there. Francis recalled that her favourite games were stuckie and cricket because she was very good at them. "Stuckie is a nice game. I liked to run and shift people, plus them always tek long fi stuck mi. I like cricket too because dem tek long fi out mi, so I used to bat ball long and it was pure fun," Francis noted.

"I wish those days would come back and everybody would come together as one again," she added.

One of the best players in sightings was Shanna-Gay Wynter. "I like sightings because I get to score points for my team by doing 'cock up a ten'. I just really like to jump. Chinese skip was also one of my favourites because when the elastic reaches the tip of the two persons holding it on their finger tips, I have to do 10 high jumps with my hand over it. If the persons were short, it was a piece of cake - but when they are tall, it made me jump higher and that's what I liked most," Wynter told Flair.

For the tallest man in the community - Harry Haslam, cricket was his game of choice. "Because mi so tall, I stick to the bowling games so mi nuh hurt the little ones dem, but mi use to enjoy playing with the youths dem. Dem neva know nothing bout nuh stress. Back in those days, we let it all out every Saturday and sometimes Sundays," he shared.

Community member Emmanuel Gordon believes that the youth got violent and that caused some of the residents to leave. "Everything was eerie until Pinie got shot and about four of the main people dem move away. Other than that, everybody start getting big and tek up certain bad behaviour and spoil di ting," he expressed with regret.

All the remaining playground players shared the same sentiment that they used to enjoy the traditional games they played and wished those days would come back.