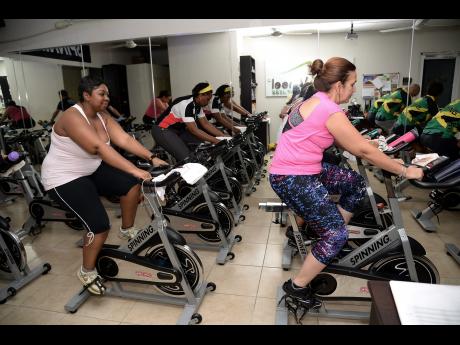 Jermaine Barnaby
Feel the burn! Davina pedals and wheels as she tries to keep up with the class. 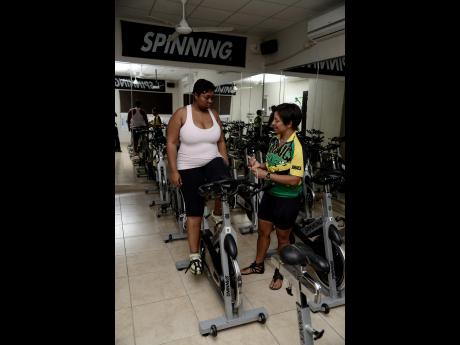 Jermaine Barnaby
Joanne Adams (right) owner of Pedal and Wheel takes me through the four hand positions ahead of the spinning class. 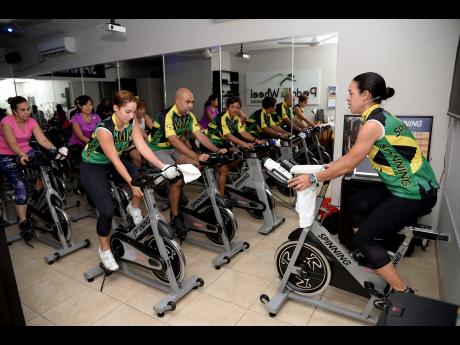 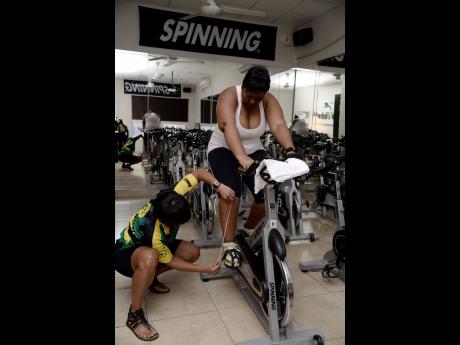 Jermaine Barnaby
Joanne Adams (left) owner of Pedal and Wheel Fitness, helps me get acquainted with the bike for my first spinning class.
1
2
3
4

There is spinning, and then there's SPINNING. For most individuals, the idea of starting a spinning class can be quite daunting. Having to choose a facility that adequately caters to all your needs and meets your expectations is another challenge.

Combining scientific training principles with road-inspired rides, Pedal and Wheel Fitness, is a one-of-a-kind facility that delivers expert coaching. Being a cardiovascular heart-training programme, there are several health benefits to be derived from this type of activity. Pedal and Wheel is a certified facility, one of only two in the island. The other is at Half Moon in Montego Bay.

Joanne Adams, owner and instructor, told Flair that the facility has been operational since May 2012 and has been growing in numbers ever since. "I studied exercise physiology in college. I used to be a personal instructor, and when I 'met' spinning, I was able to connect with it. It's a beautiful experience. When my spinning home, Shakti, was closing down, I decided to dedicate my time to spinning. It allows us to be good at what we do, allowing me to gather the best team and to decide who is the next potential instructor that could be out there exposing the rest of Jamaica to spinning."

While there are many other facilities and gyms which offer spinning, King believes that by sticking to one particular exercise, one increases their chances of succeeding and mastering the activity.

"I think you do better when you stick to one thing, that's just my opinion. But, spinning is what I love and this is my passion," King stated.

She added, "We are scientific in our approach - the calendar year is divided into different heart rate intensities. We ensure that before we take anybody to their highest heart rate, their bodies are prepared. That's why anybody can come to our class - a newcomer, an avid rider, a fitness enthusiast, everybody. We always stress that persons ride at their own pace."

Having never done spinning before, I did not know what to expect from a group class, but I heard that it burns serious calories, so I was game. After I decided on a bike, King adjusted my seat, handle bar, and pedals to my height, before teaching me the four hand positions on the handle bars. After a few tense minutes of getting my buns acquainted with the seat, I was ready to start my spinning.

Intimidation immediately set in as other members of the class began filing in and immediately began pedalling up a storm. However, my fears were put to rest as instructor Lisa Adelle-Jondeau told me to work at my own pace.

I tried my best to keep up, and though I lagged behind, and had to stop several times, I could already feel the burn. About half an hour into the class, my buns were begging for a break. Sensing my discomfort, King gave me some very soothing and effective tips to keep my mind off the fatigue and focused on pedalling.

"Some of the misconceptions people have about spinning is that it's boring - it's a bike that sits inside and goes nowhere. In fact, spinning aids in other sports. It's perfect for those who are injured and are recovering and need rehabilitation. There is also no impact in spinning unlike using the treadmill, zumba, aerobics, running, among others. It is one of the best rehabilitative forms of exercise," King told Flair.

1. Arrive early. Tell the instructor that you are new and have them set up the bike for you.

2. Work at your own pace. It might be daunting to see others pedalling away, but everyone had to start at square one. The instructor will give guidelines about how much resistance to add, how fast to pedal, when to do certain moves such as sitting, standing, or sprinting.

3. Expect saddle soreness. Believe me, this was one of the biggest issues I had, but its quite normal. Feel free to stand up out of the seat when you need a quick break.