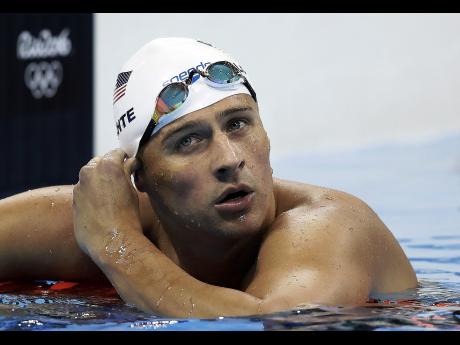 If you feel like a punk for telling a fib or two in your lifetime, just remember you're NOT Ryan Lochte.

The US swimmer told Rio police at the Olympics that he and three other swimmers were robbed at gunpoint. Thing is, Lochte kinda forgot to mention the part where he and the others urinated outside the gas station where they had stopped. He also kinda left out the part where they vandalised the gas station as well. Turns out the 'gunmen' were security guards. And the money handed over was, we assume, to pay for repairs.

Since the truth came out, Lochte has lost sponsorship from Speedo, Ralph Lauren, skin care firm Syneron-Candela and Japanese mattress maker Airweave. According to media reports, Lochte, who has an impressive 12 Olympic medals, made between US$1 million and $2 million over the last year or so. Now a million doesn't buy what it use to, but that's still a fair chunk of change. Not saying our good pal Ryan is broke, but he's probably not throwing any Hennessy parties any time soon.

That's the thing with knowing you messed up. You say dumb stuff, or downright lie, or at least 'stretch the truth'. Lochte said his original story was true, that strange men pointed guns at them and demanded money. Technically, that is what happened. But faced with the certainty of being chastised for doing something stupid (while drunk no less), he did what any self-respecting man would do. He dug himself deeper! Problem with Lochte is he apparently forgot that countries not named US or Russia or those 'big nations', also have CCTV cameras. Oops! So once the footage was found, story well and truly came to bump. Now Lochte's pocket will be smaller, unless he starts writing movie scripts. I mean he's got an imagination right?

Now, the bad thing is I understand why he did it. I don't lie often (I swear that's the truth) but when I do, they can be some whoppers. Trust me, I'm still trying to extract the dirt from my teeth after putting my foot squarely in my mouth a few times. In fact, I lied so badly one time, my shoelaces were coming through my nose. The scars (literal and figurative) from that event haven't healed, and won't heal for some time. My point is merely this: I'm not going to crucify the swimmer for his transgression. Di whole a we tell lie! Just that ours don't tarnish a city's reputation, waste the police's manpower and time, and cause us to lose millions in endorsements.

Aah! But here's where the world nuh level: Lochte will suffer for now, but in the long run, him will still eat a food. Our lies? Seem to carry on forever. He had left Rio by the time the truth came out, and let's face it, he doesn't have to go back (not recommended anyway). But your troubles? Follow you like a hungry puppy. Sigh! Too bad we all can't just hop on a plane and leave like Lochte. And that's the truth.