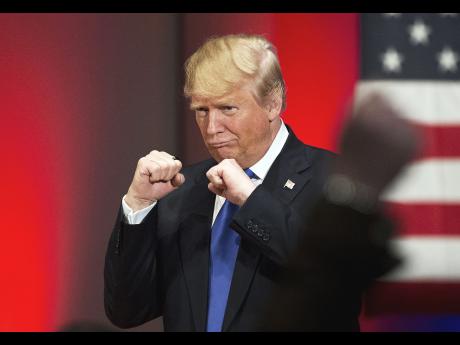 There are many things that peeve me (and I mean whole heap) – but I really, really don’t like to be wrong.

When I was a child and the teacher asked a question, I sometimes shuddered at putting up my hand for fear that I would get the answer wrong. Neva want nobody a laugh afta me! Over time, I’ve got a little better, but I still hate being wrong.

When I make predictions, I love it when they actually happen. It makes me feel good and maybe, dependent on the topic I predicted, I may even feel slightly ‘Nostradamusesque’. Sometimes I am so certain, I’m willing to bet money I don’t have.

So you will understand my chagrin at the recent happenings in the United States of America. Somebody, anybody, tell me how di hell Donald ‘Chump’ win? I was certain Hillary gone wid di ting, but at the very least, I knew that it all depends on how people came out to vote on the day. So while in this very space I said that Hillary mus’ just show dem di whip, apparently, the finishing post did likkle further than mi did think. Or maybe Trump gi fi him horse some Viagra or something, because I swore his chances were as dead as a door knob.

When I woke up last Wednesday morning, I swore I was dreaming. How can a bona fide, legitimate, half-idiot be the next president of the US? A suh Americans really nuh want a woman president? A so dem tired a career politicians? A so dem still nuh like black people? OK, I might be pushing it a bit with the last one. But considering that some of Trump’s rhetoric felt like the racist, sexist and all other ‘ist’ type, I wonder just how far the US has actually come in over 200 and nuff years of democracy. With democracy like this, I know why people like dictators.

But, like all the other times I’ve been wrong, I’m not too proud to admit my error. You have to give it to The Donald. Him win fair and square. I thought ‘Chump’ couldn’t play dominoes, but him drop a decent back-to-back six-love pon Hillary, bwoy. All Barack supposed to feel even slightly fool-fool, because di way him did a gwaan like di hype man fi Hillary sound system, mi know him did tink say she gone clear, too. But such is life. Yuh never know what the future really holds. All di polls and everyone got this one wrong. Don Anderson and Bill Johnson mus’ feel better.

So what does this mean for the US and the world? Well, I could give some predictions, but somehow I don’t think that would be very wise under the circumstances. So I will adopt a wait-and-see attitude with this one. I leave with something I saw on a meme – George W. Bush is giving a toast and saying, “Good luck, America”. I have a feeling they may need it. But what do I know?