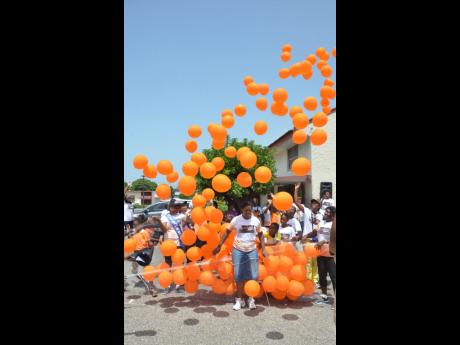 Contributed
LASCO Top Cop, Detective Sergeant Ava Lindo is in the midst of the orange balloons — released to close an empowering day on addressing violence against women and children — at the local Orange Day initiative hosted by LASCO/NAJ Nurse of the Year Treveen Palmer-Miller on Saturday, June 25 at the Holy Cross Church on Half-Way-Tree Road. November 25 to December 10, marks 16 days of activism for elimination of violence against women.

November 25, the International Day for the Elimination of Violence against Women, to December 10, Human Rights Day, will mark the 16 Days of Activism against Gender-Based Violence. The campaign is a time to galvanise action to end violence against women and girls around the world.

One of the major challenges in its efforts is the substantial funding shortfall. As a result, resources for initiatives are severely lacking. Frameworks such as the Sustainable Development Goals, which includes a specific target on ending violence against women and girls, offer huge promise, but must be adequately funded in order to bring real and significant changes in the lives of women and girls.

To bring this issue to the fore, the UN Secretary General's campaign UNiTE to End Violence against Women's call for the 16 Days of Activism against Gender-Based Violence in 2016 is 'Orange the World: Raise Money to End Violence against Women and Girls'. The initiative provides a moment to bring the issue of sustainable financing for these initiatives to global prominence, and also presents the opportunity for resource mobilisation for the issue.