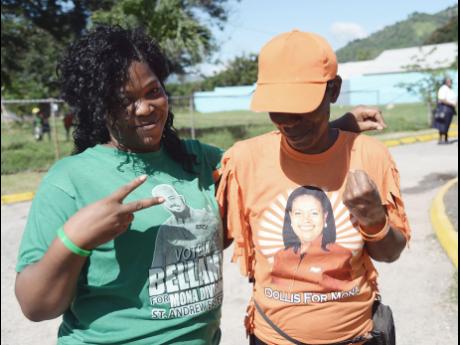 Now, I thought we were electioned-out after the event in the United States. But, unfortunately, we had one more to deal with before the end of the year. Anyway, while I was heading to work on election day, I put on what I felt like wearing. Nothing fancy, just normal work clothes. Had it been the general election, I might have gone for something with 'media' or 'press' written on it.

So I turn around in front of the mirror to see how I look, and realised that my shirt was orange. Yea, as in the same colour as one of the major political parties. Now, while some of my Hanover relatives would be quite proud of the attire, I decided to change shirts. This isn't because I dislike the party in question. I respect both major parties, I just ain't voting for them.

But, most important, I didn't want some overzealous, potentially ignorant (in the original sense of the word) individual to buss mi head - because of the colour of my shirt. And again, just to be clear, I would have taken the same course of action had I found myself wearing a green shirt. I cannot tek di bodderation. While some persons will make a joke of it, others will be dead serious.

Having studied some amount of Jamaican history in school, I know that the political seasons of my lifetime have been better, and in some cases worse, than previous ones. I think, generally, the wider population does not care anymore about politics. They still have some interest in the general elections, but local government? Nah. I bet 90 per cent of the population has no clue who the councillor is for the division in which they live.

But somehow, without fail, there are always a select few decked out in their party colours, making a downright nuisance of themselves. I've always said that elections are usually the time of year when they get to eat a decent food. Who am I to argue with that? But I still don't feel like we've got completely to the point where the colour of your attire is not an issue during certain times of year.

I know a few individuals who refuse to wear or use any item that is either orange or green in colour. At the very least, if they see a person using an item with said colour, they feel the need to mention it.

"How dah phone case deh so green?" someone asked my co-worker once. My media house colleague was far from amused. He was more befuddled than angry, to be fair, but I think, like me, he couldn't believe people still thought like that.

So when I put that orange shirt back on the hanger from which I had taken it, that's what was on my mind. Knowing my luck, I would have met someone with that mentality, who may have been under the influence of two 'whites', and they might just take offence. Didn't have time for that.