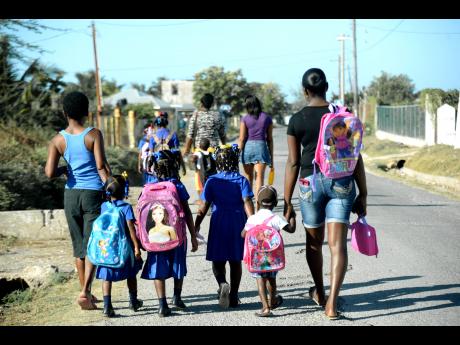 Man, times have really changed. Growing up, my parents never spoke to me in a certain manner. And if me think me did bad, I couldn't dare talk to them in any old fashion either.

Granted, there were a few times when I thought they were a little too strict but hey, show me a parent of yesteryear who wasn't too strict at times, and I'll show you a parent of today who isn't too lenient.

I noticed the times have truly changed in two instances I came across in downtown Kingston; a place some fear but where I actually feel quite comfortable.

The first involved a man whose two sons came to see him. The man was preoccupied sure, but in my world, parents always have time for their offspring.

So one of his sons made a request (of what I can't recall).

Apparently, the request did not sit well with dad and the little boy was greeted with a command to do unhealthy things with his own mother. Note: he is the father!

I couldn't believe what I was hearing. I've heard strangers tell each other the same thing, but not a father to his own son.

By the way, did I note the boy was no older than about seven years old.

The second incident involved schoolchildren. I noticed a boy grasping the collar of the girl he's walking with. She didn't seem too perturbed, however, they were in deep conversation, as in, the boy was fervently whispering something into her ear. What I heard next baffled me.

"Whore!" I heard another student shout, to the unmistakable glee of his schoolmates. Note, this child was even smaller in body than the 'lovebirds' that had just passed me.

Just when I thought things could not get any worse another student said, "You learn fast, eeh!"

If I am to go with my worst fears, I would assume both phrases mean this girl (who looked under 14) had more than a few boys grabbing her by the collar so to speak.

Now, whether this is actually the case or not, I have no idea. But it bothers me that her schoolmates would see her in that light, and from what I could see of her reaction, she wasn't entirely disturbed (if at all).

What got me even more despondent was the fact that, in both cases, the adults who were around me on either occasion, found the incidents funny.

There was, at the very least, no outwardly vocal condemnation for either the father, or the students.

Children are no longer children. Things that people of my age and older didn't think about or come across until much later in life, these children are having thrown at them on a daily basis, at home no less.

They can tell you more about 'big people things' than some big people. And the way some parents relate to their children is, at best, appalling.

So imagine when these children become parents. Sigh, not for the first time I weep at what the future holds.