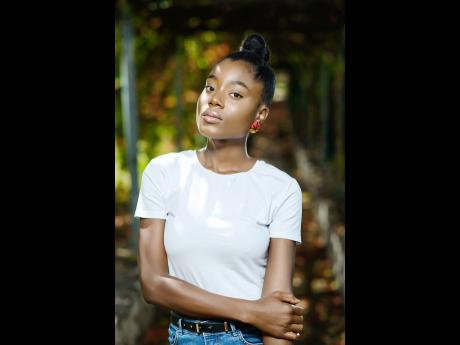 Gladstone Taylor
Sevana is a strong, beautiful soul who remains humble on her journey towards success.

Singer, songwriter and recording artiste Anna-SharÈ 'Sevana' Blake is known for her conscious lyrics, her strong personality and her soulful vocals. But it is upon her regal presence that you experience the true gem of the 25-year-old.

Born and raised in Savanna-la-Mar, Westmoreland, Sevana was not your typical singer. She had no experience in singing and had plans to become a doctor, but all that changed when nine-year-old Sevana sang along to Celine Dion's A New Day Has Come around the family's breakfast table.

With a hearty validation from her mother, Sevana set out to explore her gift, seeking other validations that music was her soul's purpose in life.

In 2010, Sevana, along with two friends, became the trio SLR, who wowed the judges and made the top 10 of the televised talent show, Digicel Rising Stars. Though the process was a culture shock for the inexperienced singer, Sevana learnt her lessons and was driven to give music a chance.

'THIS IS WHAT I WAS BORN TO DO'

"Funnily, music moved from 'I'm really good at this' to 'this is what I was born to do'. Nothing in life has ever given me the joy I have when I'm writing, listening or dancing to music. I just know that this is why I'm here, and I take it seriously," she said.

Happily, in 2013, with just the right track, the hidden gem was discovered by her manager, Protoje, and added to the In.Digg. Nation Collective label. Sevana shares that pairing with Protoje has been a great experience as her voice is heard, understood and respected.

Being a lover of words and literature, Sevana pulls her musical inspirations from experiences she has mentally jotted down in her mind, and from these inspirations comes the beautiful rhythms that have captivated the hearts of many.

"I do have doubts when I'm writing because I want people to connect with my music and I want it to be understood by everybody, but in that, I always try to stay true to my perspective because it is valid. I try to do the best that I can, but when I'm proud of my creation, I just let it go," Sevana told Flair.

Though Sevana's natural vibe is rooted in reggae, she admits that her passion stretches across many genres, specifically blues and folk, with influences such as Otis Redding and Ray Charles.

After collaborations with Protoje and producer Wynta James, the singer went solo and released her debut EP on July 13, 2016. From this EP came one of Sevana's favourite songs, Carry You. This song, she explains, was written in honour of her younger brother and came from a place of depth and vulnerability. It was her first time directing a song and seeing her imagination come to life.

Another song that resonates in the singer's mind is Bit Too Shy. This song was one of the first singles she recorded and wrote properly to a beat that gained a lot of visibility internationally. It symbolises her growth and being able to write a story that would embody another character.

Sevana, who is the second of three siblings, is very appreciative of her family's support and continues to be humble in her journey towards success. Recently, the singer added 'Siren' to her stage name as she believes that her voice has enough presence to wake up a town.