Savings Account on Love: The Morrises say I DO 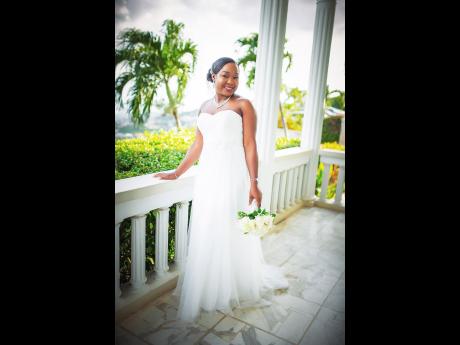 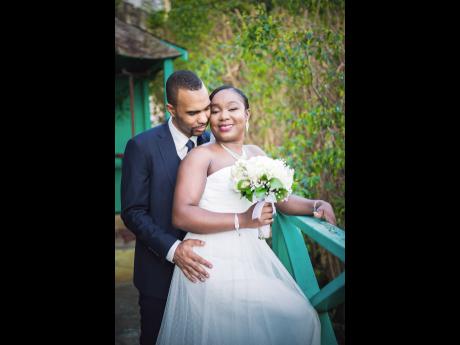 Contributed
The newlyweds are captured in a loving embrace. 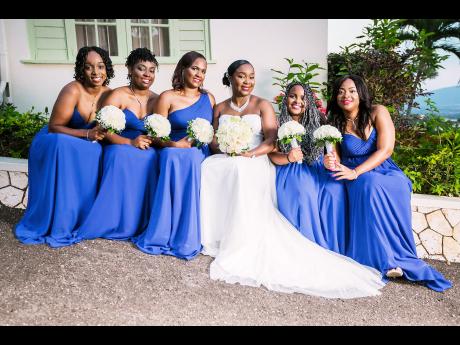 Contributed
She's royal: The blushing bride is surrounded by her royal blue bridesmaids. 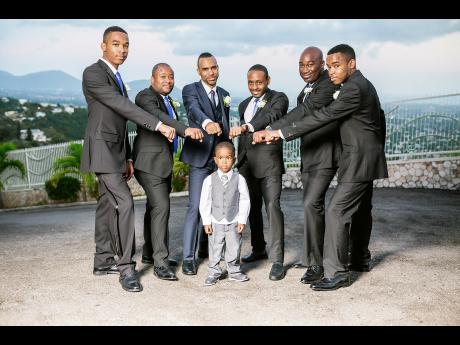 Contributed
The groom and his men in black groomsmen highlight the ring bearer, son of the groom, Thiago, dressed in dapper grey.
1
2
3
4

When it comes to bank transactions, the first question you're often asked is saving or checking? So when Stephanie Brown and Dwayne Morris crossed paths at the bank, it turns out that they were saving their hearts for each other.

The two met at the Scotia Centre in June of 2008, on the heels of Stephanie completing her degree at the University of Technology.

She told Flair, that she found Dwayne to be "very quiet, charming and caring. He was always checking up on me throughout the day, asking how I would get home on the bus, etc." She noted, too, that he described her as a very nice person with a calm demeanour - quiet by nature. Sharing similar personality traits immediately ignited a romantic spark.

They began communicating via the then popular BlackBerry Messenger (BBM) and would often spend long hours on the phone at nights. They also attended parties and sporting events together, but neither of them would make the first move.

"We remained close friends until early 2010, when we shared our very first kiss over breakfast," Stephanie shared. That kiss, Dwayne confessed, stole his heart. Short visits became sleepovers. Weekends together turned into them moving in full-time in 2011. By November of 2013, Stephanie gave birth to their heartbeat - Thiago. With love in check, the new addition to the family, there was only one piece of their lives missing - marriage.

On December 28, 2015, Dwayne took Stephanie to one of their favourite restaurants - Red Bones Blues CafÈ. Over dinner, she realised that he kept professing his love for her and had been taking quite a few bathroom breaks in between - something she found very strange. She told Flair, "I actually thought he was getting sick. But then he took my hand, looked deep into my eyes and asked me, 'Will you marry me?' Now, I'm a food lover, but I immediately lost my appetite! I couldn't take another bite!" With tears of joy, she responded "Yes, of course I will!" In that moment, through Stephanie's eyes, Dwayne had saved the best for last.

Stephanie single-handedly planned their wedding, merging her vision for her big day, with her love for event planning. "The hardest task was to create a guest list of 70. I was assisted by very close friends and family members, who were given specific tasks. Teamwork made this dream work. My colour theme was royal blue, silver and white. For me, blue symbolises trust, loyalty, stability, confidence, truth and it is also one of my favourite colours," she added.

On June 6, Dwayne Morris and Stephanie Brown entered a state of nuptial bliss when the two stood before God and their guests to become husband and wife. Their beautiful garden wedding ceremony and reception at the enchanting City View Hotel in the hills of St Andrew, overlooking the city of Kingston was all the couple could had ever dreamed of.

Officiating Minister Ewart Watson kept the ceremony short and spicy. Stephanie was an absolute vision of beauty and elegance, wore an ivory wedding dress from David's Bridal, but she was told that it was their son who stole the show walking down the aisle before her, with the sign - "Daddy here comes our girl".

The newlyweds described the main event as a relaxed evening, filled with fun, laughter and, of course, love. "The toasts from close friends had us in stitches and the after party was lit."