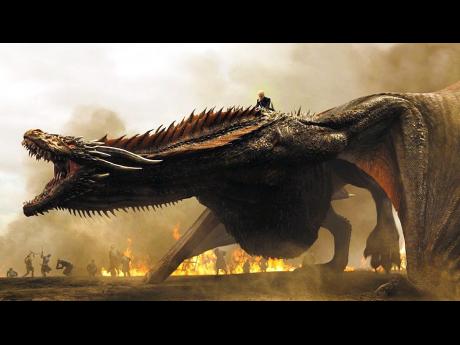 Emilia Clark as Daenerys Targaryen on her dragon, Drogon.

Not for the first time in life, I feel like an outcast. In all fairness, this time it's not such a big deal for me, like when I was in high school.

There's a popular (and when me say popular, I mean popular) show called Game of Thrones. It's set in a fantasy world with strange lands, even stranger people and even dragons.

It's just because I watch so much TV and this evil thing known as social media, that I know of the show. But I have a confession, I've never watched an episode. Don't faint. Don't laugh. Just accept the truth and carry on with your life.

Except for, perhaps, half of an episode I watched with a friend on her phone, that's it. I've seen a meme going around on social media of persons declaring they're in the one per cent of people who have never seen an episode, and I'm clearly one of them. But the thing is, I don't think it's just one per cent; people are just exaggerating.

If you start calling names, I might be able to realise they are from the show, but who plays the character or what the character's back story is, I have zero idea.

Of course, even among Game of Thrones fans, there is a tier system. There are people who have never missed an episode from season one. Then there are those who joined in the fun circa season four (that sounds like me with The Walking Dead on AMC). And then there are those who got interested because their friends (or people they follow on Instagram) are always talking or posting about the show.

But it feels like however long they've been viewing the show, they are now totally hooked. And when I say hooked, I mean the eighth deadly sin (along with the original seven in the Bible), is to talk out the next episode before others have seen it.

I've witnessed a few offending parties commit that error. I haven't seen vitriol spewed like that at any one person since Gatlin crossed the finish line first at the World Championships.

People are soooo into this show, that now that this season has ended, some people are almost literally walking around like zombies in the aforementioned Walking Dead. In fairness, I have to admit that I'm a little like that when football season is over. But at least football is real, as opposed to all that fantasy stuff.

So, again, I'm kinda sitting here in my corner of the universe and wondering why I'm not gung-ho about something so many people a dead ova!

Maybe I'm just trying to be different. Maybe I'm technologically challenged so I'm still lingering with cable and mi nuh have dat channel. Streaming via Amazon Fire TV Stick and other devices is clearly the way to go. Or maybe I'm not crazy about getting so deep into something that's fictional.

Although with all the crap going on in the real world, I won't begrudge people for finding an escape.