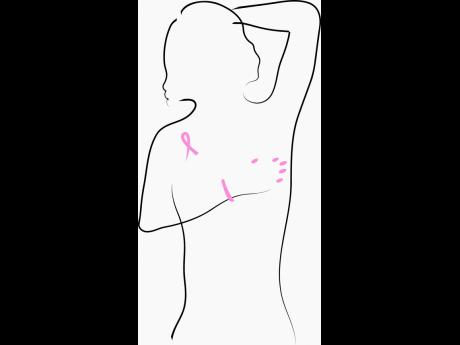 Ladies, let's face it: we all grew up wanting them and when they came in, thanks to puberty, they either needed to be bigger or smaller in size - the ideal was surely an anomaly.

So whether we liked them or not, our breasts, boobs, tatas, however you choose to call them, would transform into our lifelong friends (or frienemies, as the case may be). And they would come in extremely handy during the erotic scenes of our life stories. Why? Because those of the opposite sex are absolutely fascinated by them! Their interest in supple succulence, expressed through unadulterated passion can lead to an arousal so awakening, so engaging, so exciting and so stimulating, that these twins, without even recognising it, have becomes our strength as well as our kryptonite all at the same time.

But what happens if your apples are tainted by an evil tumour? Do they then become forbidden fruit? For many women faced with the realities of breast cancer, they do.

One such woman is Vanessa Parker*. The 35-year-old dental assistant from Manchester revealed that she didn't even realise how attached she was to her breasts until stranger danger breast cancer reared it's ugly head. "I loved them in low-cut dresses or the right blouse. And when it came to sensuality, the package was my entire body. I had to look a particular way and my breasts were the perfect accessory for my figure. Not too big or soft, just right cups. But after my diagnosis, I was devastated," she told Flair.

While she was out of the mastectomy zone, she did have to remove a part of her right breast. With that removal, they extracted her confidence, too.

"It is not that I did not want men to touch my breasts, I didn't want them to touch me at all. I felt like damaged goods." One side of her, now smaller, she described the scar that remains big and hideous and she could not stand to look at it, "If I couldn't stand to look at it, why would a man? I just felt incomplete and the fact that my relationship ended during the midst of this, it really didn't lift my spirits one bit."

A little of her self-esteem had been gained after meeting a man who tried to reassure her that she was beautiful, but she still didn't allow him to see her scar or notice the difference in her once-identical twins. But then, one day everything changed.

She met someone new and, moved by his presence, she decided to start off their potential union on a clean slate. Telling him everything before they had even started dating, he took it all in strides and made her feel like her old self again. "He never looked at me as something that needed fixing," she added.

But when it came time to broach the stage of intimacy, she was still adamant about not removing her bra, sharing that was definitely going to happen. He exercised patience and over time, built enough trust between them for him to ask about seeing the scar. Parker gave him an upfront "No", but he employed gentle persuasion on her reluctant heart. She gave in and what he did amazed her, "He kissed the area and then kissed me, saying it was just a little scar, something that I shouldn't be ashamed of."

She continued, "Usually, I don't need a man for confidence, but I needed someone to just not make me feel disabled. To him, I was complete."

Now he sees her scar as a war wound. She went to battle and conquered, with this scar, "The fact that I am alive shows my strength and not my weakness."

As it related to giving advice to women in her shoes, she had this to say, "Many times we think that it is the man who won't be attracted to us, when in fact, it is our own insecurities that we have placed on the man. We hate how our body now looks so we feel that the man hates it too. Sometimes we need to give them a little more credit. Take time to heal emotionally, do not rush it. Go to a counsellor if you have to. But don't transfer your emotions on the man. Speak to him and be open and you will be surprised that your relationship is grounded on the right foundation and how easily everything just falls into place."