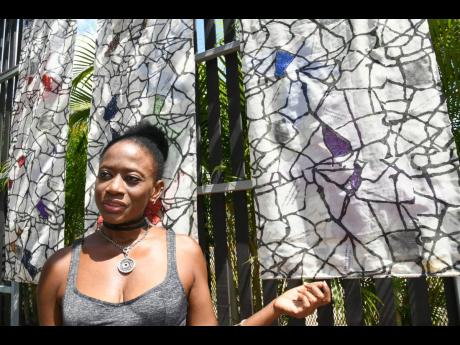 Rudolph Brown
Nadine Hall presents ‘Trapped’, an art piece that represents the turbulent relationship she shared with her mother. 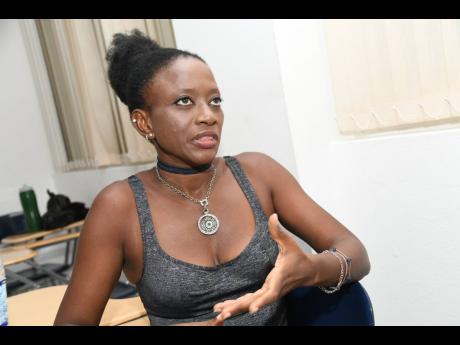 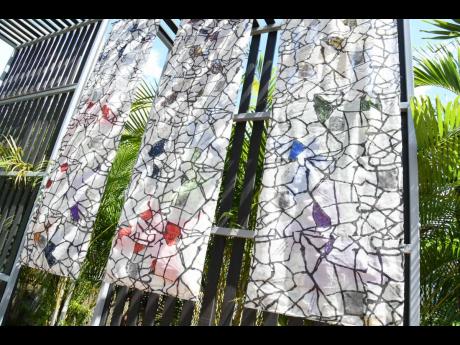 Rudolph Brown
Trapped, tells the story of a broken relationship. 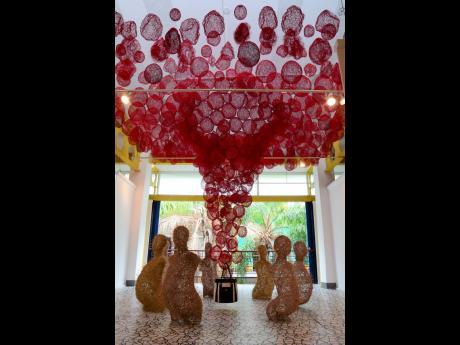 Contributed Photo
Heirlooms is a reflection of Hall's legacy, heritage and identity. 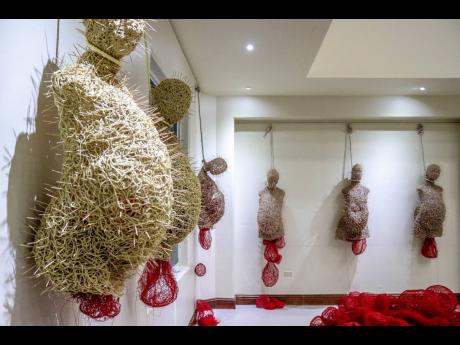 Contributed Photo
Heirloom 2 was created to stir discourse about the self-destructive tendencies of marginalised males in Jamaica.
1
2
3
4
5

“I tell stories with my art. They are not feel-good tales, but stories that come from pain, rejection, and closed doors, because I had to fight to become who I am. The narratives say I’ve won. I dictate what I become, not society or the errors of my mother,” explains an undefeated artist and powerful woman, Nadine Hall.

Holding a bachelor of fine arts (BFA) in Textiles and Fibre Arts, her first degree at 43, Hall has trod an almost unbearable journey. It was a tumultuous flight, characterised by prickles and thorns that stalled her growth, but now she’s effortlessly soaring with no regrets. Her next stop is the University of Miami, where she’ll be pursuing a Master of Fine Arts in sculpture on a three-year scholarship. Hall asserts that she is the first Jamaican to receive this scholarship.

To wholly appreciate her creations, you have to learn her story and pay keen attention to your surroundings. The Edna Manley College of the Visual and Performing Arts (EMCVPA) graduate uses her talent as a coping mechanism. Being sexually assaulted for the first time at just two years old and again six years later by her former hero, her father, taught Hall how to make difficult decisions.

“Before that, my father and I had a good relationship. I called him ‘Papa’ and he called me ‘Mama’. Every morning, he would kiss me and I would do the same. But when he struck, I realised that he was a bad person, and I had to end the relationship with him. It was painful to do at eight years old,” she said.

However, the redemption of her joy did not come with this choice. At 10 years old, she was molested again, this time by a close relative.

After leaving high school, young Hall enrolled at the Excelsior Community College to study business administration, majoring in marketing. This was to become her bread and butter, her ticket out of poverty, as she explored the artistic world. But after a year, and being troubled with financial instability, she was forced to prematurely end her schooling. By this time, she had also taken a break from the arts.

In 2011, she started art school, after being rejected more than a decade before because she could not draw. Hoping for a second chance, she invested in tutorials on YouTube, which helped her develop the well-needed skill.

“I applied for an associate degree and not a bachelor’s because I felt like I wasn’t good enough. But I got accepted for the BFA. My heart leaped when I got the letter. I was like, ‘Wow! Finally I’m going to get a degree’,” she said with a smile.

Hall paid her way through college with annual scholarships as she still lacked the funds to cover her tuition. And with the support of her friends, family and EMCVPA, she left the institution in 2015 not only with her degree, but also with the Principal’s Award for Most Outstanding Student in the School of Visual Arts and the Craft Wicker and Things Award for Most Outstanding Researcher.

‘Heirlooms’ and ‘Trapped’, a tribute to her deceased mother, are two of her popular pieces. Symbolism, layering, screen-printing, finger-weaving, reverse appliqué and photo transfer are the techniques she skilfully uses to send messages through her works of art.

“I’ve dedicated my life to paying homage to her. She had a rocky life and didn’t make the best decisions, but her circumstances warranted the decisions she made. I wanted to find something to celebrate her and let her know that I understand why she did the things she did and that I have forgiven her,” Hall humbly explained.

She believes that she is meant to create things. Her fascinating pieces focus on culture, gender, race, identity, and social ills. Social commentary also forms a huge part of her work. Hall’s interest in the creative fields – art and fashion – was influenced by her mother, a dressmaker who “worked magic with fabric”, even though they shared a turbulent union.

Conferences and exhibitors, too, have opened doors to the burgeoning artist. In fact, the Rex Nettleford Arts Conference paved the way for her to earn an artist residency at the Diaspora Vibe Cultural Art Incubator in Miami.

She looks forward to embarking on her new journey and hopes that her work will inspire others to excel.

“I want to tell people to go for their dream in spite of their circumstances. If I did not believe in myself, I wouldn’t have reached where I am. I have a task to complete – that’s encouraging change through art,” Hall said.