Filming with AS Dawkins Productions 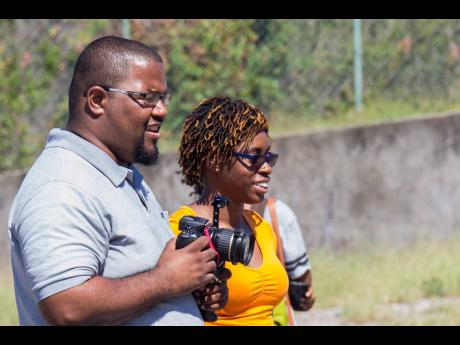 “In high school, after Hurricane Dean, I didn’t have electricity for a really long time and so there was no Internet. Out of boredom, I spent five or six days writing my first 20-page novel,” said 26-year-old Aliceia Dawkins, as her eyes glistened with passion.

With hopes of spending her days in the kitchen, Dawkins started a food and beverage degree at the University of Technology, but quickly realised that the food service industry wasn’t for her. In pursuit of purpose, she quickly made the switch to the liberal arts department and graduated with a bachelors in communication arts and technology.

“I never really thought of film-making as a producer or director until about second year during a film-making course. I had only dreamt of writing books and movie scripts,” she said.

Dawkins spent more time with the camera, understanding editing and, of course, watching behind-the-scenes clips of films that were interesting to her.

UNBOUND (2017), her latest film, is about Detective Sergeant Mia Richardson, a member of CISOCA, who is bound by an oath to protect the vulnerable. Her investigation into the brutal rape of a young girl is derailed by a man who is neither friend nor foe; a rogue officer of the JDF known only as Roman. Mia’s investigation uncovers a sinister human-trafficking ring but also betrays a secret from her past. Now she must put an end to a personal evil and dive head first into a confrontation that she cannot hope to win on her own.

“David Johnson is my co-writer and director. He had an idea for a film and by the time we sat down with executive producer and actor Stephanie Hazle to flesh it out, the idea changed completely,” Dawkins said.

Dawkins expressed that the entire team was indeed a dream. She enjoyed working with them and definitely excited about part two of UNBOUND.

Besides being a filmmaker, Dawkins is a social media manager and singer who draws her inspiration from the life of her late father. “He literally came from nothing to something. He worked hard to achieve everything he wanted and worked even harder to maintain it. That drive is apart of who I am,” she said thoughtfully.

Driving full speed ahead into fulfillment, Dawkins hopes to help put Jamaica in the map where writing and filmmaking is concerned, along with outing her idea of a grand feature film into motion all within the next two years.