Banking on success with Stevie Barnett 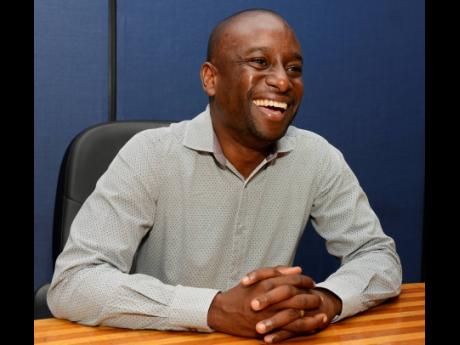 They say it is a wise father who knows his own child. So for a son to be robbed of this wisdom and face the constant reminder of this missing piece of this parental puzzle, it can be both devastating and heartbreaking. That didn’t stop father of two Stevie Barnett from stepping up to the plate and being the best dad he could be for his sons.

“Initially, when I thought about banking, while going to school, I saw that the banks would close early. So I wanted to pursue a career that would afford me the opportunity to leave work early too.” He realised soon after entering the finance industry that this was not the case. Banking required long hours, even beyond closing time.

Born and raised in Clarendon, Barnett lived a humble life. Joy filled the room as he recalled the simpler days of playing the role of father and husband in dolly house, going to bird bush and cane piece. He admitted that despite his family being poor, he had a wonderful childhood.

While attending Lennon High School, before boarding on campus, he took a long commute from Old Harbour to school. He described those trips as very tiring but fun and adventurous. Armed with a bachelor’s of science degree in finance and accounts at Northern Caribbean University, he began his professional pursuit at the place which offered him an internship, Southern Regional Health Authority. As an accounting clerk, this temporary job led him to move on to a thriving banking career at the National Commercial Bank (NCB).

Joining the NCB team as a teller, he never imagined that he would go on to work there for 10 years. He really enjoyed the time at the highly respected organisation. But just to test the waters, he applied for a position at Sagicor Bank and promoted himself to the manager’s circle. “It has been great so far. Sagicor really nurtures a family environment. By large, it’s a good company. I’d encourage anybody to work there,” he said of his almost three year journey.

Demanding clients can be difficult at times, but Barnett remains steadfast, noting those encounters as a pleasant par for the course set to mould him into an even stronger banker. He also shared that working in sales has a way of presenting long work hours and that can place a negative impact on family life. For a harmonious balance, he has vowed to go home early at least one evening out of the week to be with his wife and children and he maximises on quality time with them over the weekend. “On Saturdays, I take my sons to football and chess. With my wife, she is my main support so time is spent with her every night. I ensure that we pray together and go to bed together, majority of the time. We also read the bible and have devotion with the children as well. We also do family vacations once a year. And sometimes we ask grandma to keep the children over the weekend, so my wife and I can have some fun: we believe in keeping the fire burning bright,” he asserted with a smile.

As far as extended family support goes, he is an only child for his mother and he revealed that she is very proud of him and his achievement, giving her full support in all of his endeavours, and assisting with her grandchildren. With only one clear memory of his father lifting him when he was much younger, he finally reunited with him at 22 years of age. The meeting. he confessed, was interesting: his father actually extended an apology to him for leaving. Admitting that there was residual resentment at first, because of lost time, he has grown to forgive him and had even called him recently to wish him happy Father’s Day. He is grateful to be blessed with male figures in his life, like Bishop Currie, who is like a father to him.

With a master’s in finance from the University of Technology under his belt, he has hopes of becoming a regional or branch manager in the next five years, and even higher hopes to be president of the bank some day, “The sky’s the limit,” he added. His advice to aspiring bankers is to prepare for hard work but prepare for real rewards as well.