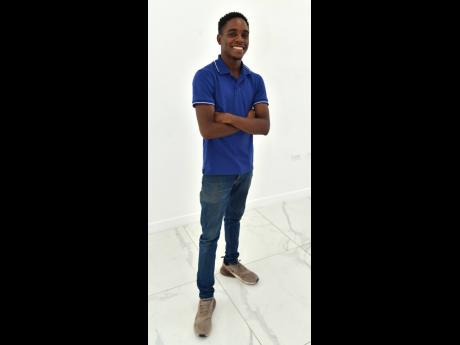 Stephan Smith, 23, has whetted his enterprising appetite numerous times before but currently, Blank Space occupies most of his time.

Smith, a fervent creative, sees the world differently from others. It’s this vision, along with his tenacity and the intuition and support of his business partner Lorie-Anne Nevers, that led to the opening of Blank Space earlier this year. It’s a pop-up place that can be used for events such as birthday soirées, anniversary and wedding receptions, expos, baby showers, and anything else you can think of. The best thing about the pearly-white painted space is that you can make it anything you want it to be.

“We were comparing our local creative space to that overseas and concluded that there is not much space for persons to explore here in Jamaica. There are a lot of creatives in art and media who would love to showcase their work somewhere. But with the hotels and conference spaces, they are not allowed freedom to fully express themselves. That led to us to deciding to create a space that will allow people to feel free to express themselves to the full extent of their imagination,” he explained.

He stresses that magic, madness, and heaven are what you can get when you become creative with a blank space. Simply because it presents infinite potential.

Smith also has a knack for technology. The University of Technology graduate studied information technology, with a primary focus on computing and software. It was during his tenure at the educational facility that he started building apps for marketing purposes as well as games. It also foreshadowed his first enterprising attempt, which came to fruition shortly afterwards.

“So, because of my background, you can understand why everything we do at Blank Space is technologically based. This makes it pretty simple to manage,” he shared with Flair.

As a leader, one clearly and easily sees that Smith does not quite fit into any box. He’s unique and influences others through his creative gift, both directly and indirectly. However, without Nevers’ support, he confessed, his impact and success as a serial entrepreneur wouldn’t have been the same. Nevers, a first-time businesswoman is also an innovative and imaginative individual, who’s keen on achieving success.

NextGen Creators is his inspirational tool. It’s a non-profit organisation that promotes technology and youth entrepreneurship. Through it, Smith teaches youngsters to use coding to build websites and manipulate technology to make a profit.

“I enjoy being my own boss. It has taught me to be organised and that is the key. And so far, I’ve learnt that having a plan, working with a mentor as well, (will) help you to get ahead. That’s because you must have some level of guidance and understanding as to what to expect when you’re running a business,” he explained.

Smith is also reminding others that challenges are a part of any business. However, it’s how you approach them that matters.

“Sometimes it’s people who will be the hardest to work with. But as long as you remain calm and understand that problems inevitably will arise, you’ll be fine. Remember, there is always a solution for any difficulty,” he said.