Dishing on the ‘Foodie Call’ 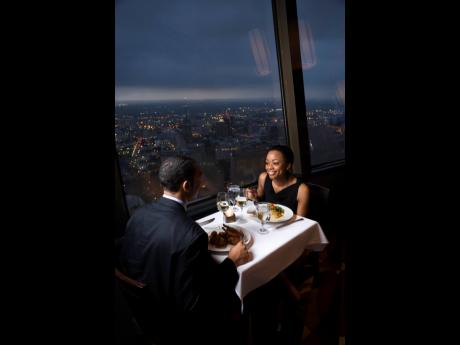 “I’m here for the food.” Here’s a phrase that a few men have been experiencing on date nights. The debate of whether a woman is in fact going out on dates to seek companionship or for fine cuisine has been trending on social scene, and Flair is here to dish in on the topic.

Commonly called ‘foodie call’ or ‘sneating’ (sneak eating), this seemingly common practice is usually executed by the fairer sex who honestly can’t or just won’t do any better. Her serial approach is often met by an equally driven predator, whose sole purpose is to carry out his act of carnal desire. There’s no problem with tit for tat. But what happens when the adventurous dating operation lacks knowledge and understanding?

Sonya Bailey* had no inkling that she would ever end up dating for food. The more she thought about it, the more she realised that it was not her calling. She was, however, already caught in the web of wealthy businessman, Charles Harrison*. Fancy dinners, stimulating conversation, amazing company: this was everything she had ever dreamed of. Until it was time to pull the window curtains. There, she discovered that her older, more mature beloved lacked spunk in the sack.

That initial attraction quickly lost its appeal. What was she to do: pass up on Mr Right, just because everything went wrong in bed? Chalking it up to first-time jitters, she went once again, hoping for frolicking fireworks. But luck was not on his side, or hers for that matter. “His intellect was a real turn-on. We spoke for hours on end. But when it came to being a beast in the bedroom, he was just the opposite. And that was a huge turn-off,” she confessed.

But she wasn’t about to lose her ‘date knight’.

So, Bailey did what she thought was best: enjoy the very best side of him, and that just happened to include food. She made plans every week for date night and he would always indulge in its merriment. “He is a true gentleman. He picks a fabulous restaurant, orders the very best dishes for our three-course meals, chooses the finest wines, shares his journey and daily stories with me, while showering me with compliments about how beautiful I looked.”

She continued, “We have the most scintillating conversations, talking and laughing for hours. And at the end of a wonderful night with him, I never have to worry or even think about the bill. No matter how high it is, he always has it covered.” As a thank you, she lets him have his way with her when the occasion calls for it, faking her way through with the hopes that one day he will make her scream for more.

Monique Gordon* also knows about sneating or foodie calls all too well. Unfortunately, she was once the prime target for picking up the tab. Yes, you read accurately. There are men making these foodie calls, too, and ‘sneating’ women out of pocket. “I was invited out by a guy, but had to turn it down because I was busy with work. He encouraged me to connect with him once I was free,” Gordon started out by explaining.

When her schedule permitted, she took the handsome chap up on his prior offer and suggested a place for drinks. He agreed. What Gordon thought was a follow-up from his previous invitation turned out to be her initiating an actual date. And many are of the view that if you ask a person out on a date, you’re expected to withstand the cost of the night’s festivities. This animosity was her first red flag.

“I really liked him and we were having a good time. I did notice, however, that he was making the rounds on drinks and he had quite a bit to eat,” she said. That was the second red flag. But she brushed it aside, thinking that he has all right to be hungry, and since he was a gentleman all night, she was sure he was getting the bill. She was sadly mistaken.

The third and final red flag came when the bill arrived at the table. Once it made landfall, her date suddenly had to go to the bathroom, where he spent a great deal of time. Frustrated by the waiting game, she went for her purse and paid the bill, only to see him reappear once the bill was cleared. He put on a world-class performance for Gordon, acting surprised when she told him she handled it. He made an attempt to reach for his wallet, but she said that it was fine. In that moment, she recalled wanting to say to him, “Your money’s no good here. And neither are you.” But she kept that thought in the darkest corner of her mind and stormed out of the restaurant.