The helping hands of Project ICE 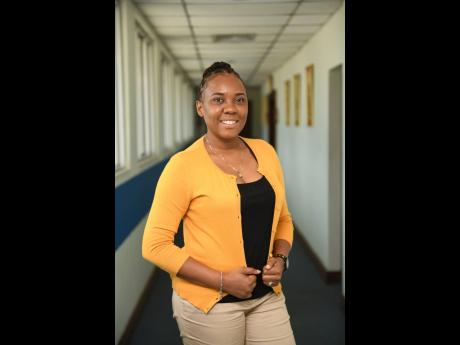 Ralph Waldo Emerson once said, “To know even one life has breathed easier because you have lived. This is to have succeeded.” Guided by this mantra from an early age, Antoinette Daniels-Martinez has made it her mission to give a helping hand to those in need with Project ICE Ja.

Daniels-Martinez wakes up each day with a new-found appreciation for life, basking in the simple bliss of her barking dogs, a sound which goes off before her alarm. Her radiant, commanding, engaging, and outgoing personality was put on fabulous display during her interview with Flair. But this was only a recent phenomenon. Before now, she was usually reserved, and never considered to be a young leader. “I was extremely shy and would never volunteer to be in the spotlight,” she confessed. She, however, always had a soft spot for giving back.

Growing up in Trench Town, Daniels-Martinez was raised by a loving mother – a practical nurse by profession, her mother worked 12-hour shifts, sometimes doubling up, just to make ends meet. This, however, didn’t deter her from teaching her daughter basic survival skills to get her through the day, washing, cooking, cleaning, or the dangers of talking to strangers. By age seven, she was already well on her way to independence, figuring out her way around the kitchen. Her mother complimented her attempt and effort, which only strengthened their unique bond.

With maternal figures like her grandmother, who cared for persons who were not family by blood, her mother, who was always taking care of the elderly, and in her formative years, Louise Welch, an older woman who took care of her until she was eight years old, while her mother worked and attended school, Daniels-Martinez was already immersed in the life of helping others. This not only put her on a nurturing path to success, she was compelled to follow in their inspiring footsteps and assist others in any way she could. “There’s no way I could be anything less,” she added.

When she met her husband, he quickly realised that she had something greater to give back to this country through her volunteerism. He ignited the fire in her to start her own foundation. And when that wasn’t enough, he turned up the heat by forcing her to register the foundation. To this date, she has had no regrets.

Project ICE Ja is a non-profit organisation that focuses on empowering youths and adults in Jamaica through education and improving their economic and social conditions, “We believe strongly that an educated individual is an empowered one, and can contribute to building a better Jamaica.”

ICE stands for: Inspire, Commit, Empower, and she started the foundation so that she could inspired others to join in on some acts of good. One of their major initiatives is the ongoing E2E Scholarship that is awarded to five students from five different parishes who are in need of assistance. They are currently attending Campion College, The Hampton School for Girls, Mount Alvernia High, Titchfield High, and York Castle High. “These students will be going into fourth form and we are committed to seeing them through to fifth.”

Another signature project ‘ZumbaVate’, a yearly interactive dance-workout session that promotes physical activity and mentorship among teens. It combines the latest dance moves with trending music paired with a motivational session at the end and has been doing well. “One of the most memorable moments was after finishing a ZumbaVate session, one of the young girls came to me and asked if I could come to her home and do the same thing – that’s when I discovered that she is from a girl’s home.”

The reception from family, friends, and colleagues, so far, has been great. Her family is extremely supportive – since her Mom has first-hand experience of knowing what it is like to have a child who needs to go to school and has no money, she is the first person to donate money to the scholarship fund.

And while she has achieved so much at this young stage, the youthful exuberance needed for helping others comes with its disadvantages. Being young is one thing. The difficulty in acquiring the donations necessary to fulfill the foundation’s mandate is another matter entirely. As she works assiduously in build the non-profit’s name, she also has to prove that it is genuine in both approach and goals. “Right now, I’m at the building stage of the foundation. I’m working hard for persons to know and recognise this name. This is a foundation that will take your contribution and ensure that it is given to the right people.”

But she remains motivated. “Real love and appreciation comes in the form of small packages and these are children. If you want an honest answer, ask a child. For me to give my full support on this mission, I will always remember the look on a child’s face when they realise what we are doing in their lives.”

The ‘Pack a Backpack’ project is the foundation’s newest initiative. She, along with her team, will be donating school bags filled with supplies to students in need. Her advice to those who desire to help others is to just do it. Start by volunteering, even on a small scale, with non-profit organisations as they would welcome the help. “My journey did not begin here, it began when I saw kindness being given to my mother through strangers so that she could raise me into a young lady. It is important that people and communities raise children instead of minding their own business. When we give back to society, we contribute to the well-being and the future of our children,” she added.