What to do if you’re attacked 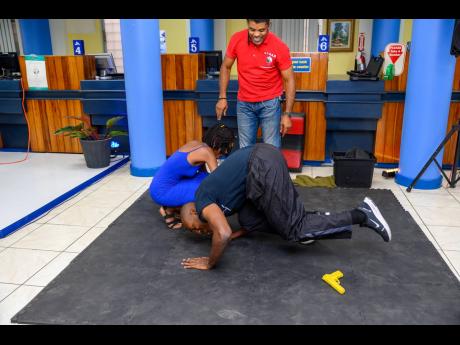 Davion Forbes
Naska Black demonstrates how to make an assailant immobile by pressing back his digits, under the supervision of Captain Robert Hibbert, martial arts expert and security consultant. 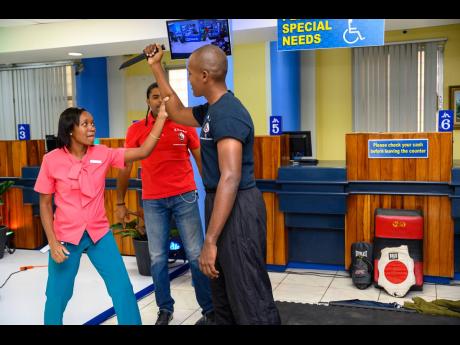 Davion Forbes
Shanique Bryan, member service officer, JN Bank, Brown’s Town, demonstrates how to stave off the attack of a knife-wielding assailant under the supervision of martial arts expert and security consultant, Captain Robert Hibbert (centre, background). After holding his forearm, she then attempts to impair his vision. They were at a members’ mingle hosted by JN Bank Brown’s Town branch focused on providing JN members with practical skills to defend themselves from attacks.
1
2

The people you trust sometimes pose the greatest threat.

That’s a lesson which Naska Black, a resident of Brown’s Town, St Ann, learned harshly during an outing with a male friend.

“It turned out that he wanted to do something that I wasn’t comfortable with,” was all the 20-something, petite young lady would say about her ordeal, as she related her story in an interview after a self-defence demonstration with martial arts expert and security consultant, Captain Robert Hibbert.

The event, hosted by JN Bank at its Brown’s Town, St Ann, branch recently was the fourth in a series of meetings organised to assist members to better secure themselves, family, friends and property.

“I learned that you don’t have to be a trained professional to protect yourself, and I learned a few ways to protect myself without running,” she said, referring to the simple tactics taught by Hibbert, which anyone can use to stop assailants from either seeing, breathing or standing.

By making the hands into claws and aiming for the crown of the individual’s head, for example, one can effectively stun and prevent the assailant from seeing, Hibbert demonstrated. Aiming for the Adam’s apple or throat will also stop the attacker from breathing long enough for one to get away, he also pointed out; or forming both hands into hammer fists and putting them up to your face to shield it, while hitting the chest and throat of the assaulter in quick succession to disrupt his or her ability to breathe.

Instead of using the knee to the groin of the attacker, he recommended swinging the whole leg like a pendulum, as this is likely to be more effective.

“Whatever happens, you have to live. The moment you start giving up, you’ve given away everything,” the expert shared. He also stressed the importance of developing a wholesome mindset, to be alert and positive about survival. That way, you are less likely to be tense in threatening situations.

“Most people assume that because you are out doing something good, nobody will want to attack you at that point in time,” commented Jesse James Patrick, another young Brown’s Town resident, endorsing the need to always be alert.

“When you’re running in the early mornings or late in the evening, you have to be careful because not a lot of people are out early in the morning or late at evening, so you have to be prepared to defend yourself,” the University of Technology graduate said.

For 70-year-old Herbert ‘Herbie’ Riley, it’s a mindset that he has already cultivated, but he, nevertheless, appreciated the tactics, especially one showing how to tackle assailants who may attack from behind.

Hibbert himself was attacked one afternoon, around 2:00, 13 years ago in Brown’s Town. He was held up by two men; one stood in front with a gun pointed at him and the other held a knife to the back of his neck. He managed to disarm the man in front by kicking him in the groin, but he did not escape being hurt from the knife-wielding criminal, whose attack he attempted to counter.

“I gripped the knife blade with my two hands and he couldn’t take the knife out of my hand,” he explained. H ended up receiving 22 stitches. In such circumstances, Hibbert demonstrated how one can lean forward and without hesitation, face the attacker and aim for his throat or eyes.

“The greatest resource you have is life, so you must do everything to keep your life,” Hibbert said.

If you’re attacked, try to:

• Impair the criminal’s vision: Make your hands into a claw and aim for the assailant’s crown and eyes.

• Disrupt their breathing: Forming hands into hammer fists, place them up to your face, while in quick succession thumping the assailant’s chest and throat.

• Weaken their ability to stand: Swing your leg like a pendulum, instead of using your knee, to hit the criminal in the groin.

A few life and survival rules to live by:

1. Whatever happens, always think that you must live. The moment you start to give up, you’ve given away everything. Maintain a positive mindset to avoid being tense and believe that you can and will survive.

2. Protect yourself first, before defending or protecting others.

3. Be aware of your surroundings at all times. For example, when in an unfamiliar environment, determine how you will get out if there is a crisis.

4. Do what you can to make our society better. The good you do can save someone’s life or your own.